Let's all go to the picture show


Recently seen and reviewed for your pleasure: 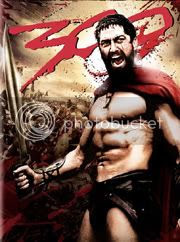 "300": So I finally saw Frank Miller's "300" movie adaptation the other weekend. And -- well, if I was 14 years old, it would've been The Coolest Movie Ever. But as it is, I thought it was a visually impressive, rather empty-headed diversion -- much like the graphic novel, which is far from my favorite of Mr. Miller's works. The tale of the Spartans battling the Persians is all testosterone and posing, dramatic stands without any real emotional heart to them ... which is totally fine as long as you're in the mood for it, really. The Spartans are so tough, so manly that it's hard to really get any pull into the story. You know they'll beat everyone up until the moment that they don't, and Gerard Butler's burly King Leondias is merely riffing on everyone from Charlton Heston to Arnold Schwarzenegger. The action in "300" is visceral but too often director Zach Snyder jumps right into self-parody (can we please for the love of God have a moratorium on "slow-motion/fast-motion" violence with blood pausing artfully before spurting out onto the ground?). The heavy-metal soundtrack merely accented the film's resemblance to one big video game. That said, it's got a nifty, burnished burnt skies look to it, and there admittedly is a ton of invention to the grotesqueries of the Persian army of the damned. But if all you're going to do is throw the graphic novel directly on the screen, what's the point? I have to admit I was a lot fonder of the "Sin City" movie by Robert Rodriguez -- the noir material there just leaned itself more to a movie adaptation, it featured better acting and cleverer use of the "panel as film frame" idea. But for what "300" aspires to be, I guess it does the job pretty well. Grade: B- 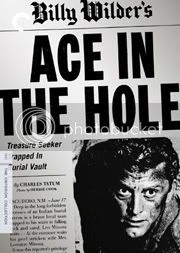 "Ace In The Hole": It's fashionable among some of the younger set to think of older films as innocent, that black-and-white movies don't really capture the complex landscape of life today. Not true, of course, and an excellent example lies in Billy Wilder's 1951 morality play "Ace In The Hole," a dark, bitter and cynical fable that with a little tweaking could've been made last week. Kirk Douglas is Chuck Tatum, a down-on-his-luck journalist who stumbles upon a huge story -- a miner trapped in a cave-in -- and he spins it into his own personal meal ticket. A media circus erupts around the trapped man, with Tatum orchestrating every inch of the coverage. Douglas' square-jawed he-man chews the scenery with such gusto that you can't help but be charmed at the same time you're revolted by his oily self-interest. Douglas may not be the most subtle of actors, but that's a strength here. He's the warped idea of a journalist at their worst, all ego and no compassion. With the exception of the poor doomed miner, there are no heroes here – the miner's cruel, gold-digging wife is one of the nastiest pieces of work I've ever seen ("I don't pray. Kneeling bags my nylons"); the town sheriff is utterly corrupt; and Tatum himself is a black hole of greed. What's fascinating about "Ace" is how it hasn't lost a moment of relevance in more than 50 years. Substitute "Man in hole" for "Madeline McCann," "OJ Simpson," "Utah cave-in" or about a zillion other tabloid frenzy moments in our all-sensation, all-the-time world. It shows how quickly a human tragedy turns into a motive of profit, something that's never changed. Bleak and yet strangely invigorating, "Ace" remains an utterly contemporary film. Wilder's career includes some of the finest movies of all time -- "Some Like It Hot," "Sunset Boulevard," "Double Indemnity" -- but "Ace" remains a kind of lost sibling, largely forgotten following its release. There's a tart meanness to it that still stings. Now it's finally getting some of the attention it richly deserves with this Criterion DVD, which also includes a great hour-long 1980 interview with Wilder, and a fine commentary. Grade: A 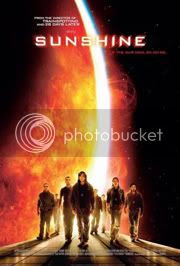 "Sunshine": "Trainspotting" director Danny Boyle goes futuristic in this sci-fi cross-breed of "Solaris," "Event Horizon" and "2001," featuring a spaceship crew in the year 2057 carrying a gigantic bomb in an attempt to restart the fizzling sun. The plot may not be particularly original, but the utterly stunning, scorched visuals and claustrophobic vibe make the style win out over substance. A solid crew of actors including Cillian Murphy, Chris Evans and New Zealand's own Cliff Curtis make up the crew of desperate adventurers trying to save mankind, even as they face their own demons. Boyle really excels at setting up atmosphere -- juxtaposing an intense melancholy with a lonely beauty. He constantly uses shots of space's vastness and the sun's boiling size to remind us how tiny his human characters really are, focusing on the isolation of the years-long mission. There's a kind of art-film meditation going on here combined with more traditional elements of danger and plot twists. It moves along faster than "Solaris" or "2001," but still takes the time to contemplate a bit. It all falls apart a little in the final act, which goes in rather pedestrian directions (however, if you choose to look at it more as a metaphor, it still works as a climax that follows through on the movie's themes). Sure, the science is probably wonky (could the sun really burn out on us in just 50 years?), but the movie delivers a convincing combination of mystery and wonder that I dug. Overall "Sunshine" leaves a haunting impression on the mind -- it's certainly one of the more memorable science fiction films in the past couple years. The things that linger are the images of a ruined spaceship, vast corridors, waves of solar fire, and an infinite that can never quite be pinned down. Grade: A-
Posted by Nik at 6:22 PM