At least Norway has some sense 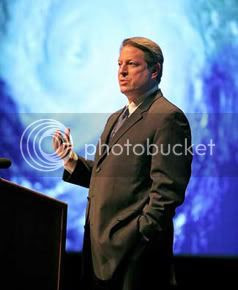 Way to go, Al Gore! I had a gut feeling the former VP and would-be President was going to win the Nobel Peace Prize, and I'm pleased to see it happened. Global warming has hit the "tipping point" as an issue in the past year or so – and it's far more obvious if you live overseas rather than in America, where FOX News and the denial machine still continues to hold an undue amount of influence. I don't know what will happen in the long run, if we're headed to disaster or mere inconvenience, but I do know the whole "head in the sand" thing isn't working. And it's great to see Al Gore's message - which he's been pounding away at for more than 15 years - is gaining traction.

I've long admired Al Gore even when he became unfashionable. I've "met" him twice - once in 1992, right before his selection as Clinton's VP, when he was on a book-signing tour in Mississippi, and then again in a huge crowd when I saw him and Bubba speak in 1996. The 1992 encounter was pretty amazing, because it was the first time I'd been in a small room with a force of personality like Gore. Anyone who makes it in politics on a national scale, be they Democrat or Republican, has to have a bit of charisma, and I just remember Gore's voice booming through the room and sheer way he rode a crowd of 50 people or so. I'd never seen anything like that in person and was quite amazed.

I maintain that Al Gore (and John Kerry) would've been above-average presidents but were dismal campaigners. Every time I've seen Gore solo, or read interviews or seen him onscreen, I've been dazzled by the man's intelligence and curiosity. I could write an entire treatise on how I think Americans hate feeling like someone is smarter than them and how being a well-learned, intellectually questing figure simply ain't cool -- but y'know, it's been done. Sure, Gore can take on a lecturing tone, can seem arrogant, and lacks Bill Clinton's masterful touch of being really, really smart but really down-home at the same time. But I think Gore as a public figure is going to have a far longer shelf-life than the man who narrowly squeaked into the Oval Office instead of him. I have far more respect for him than I do most politicians.

Sadly of course this is all seen through the insipid political filter that's taken over American life, where everything is "left" or "right", black or white. Anyway. Congrats, Al.
Posted by Nik at 8:30 AM