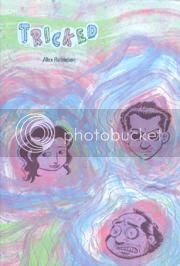 'Tricked' by Alex Robinson
Alex Robinson leapt from minicomics to graphic novels a few years back with the massive, wonderful "Box Office Poison," a tale that featured several friends, lovers and enemies wandering through life in New York City. It was filled with vivid characters and great cartooning, with Robinson's detailed art kind of a combination of Dave Sim and Martin Wagner. Now Robinson's back with "Tricked," which combines "Poison's" character-focused storytelling with a harder, suspenseful thriller vibe. It takes a washed-up rock star, a young waitress, a girl searching for her father, an obsessive crank and several other characters and gradually weaves a story that brings all these unrelated people together for a startling climax.

"Tricked" isn't quite the tour de force "Box Office Poison" was, but it's a hard act to follow 600 pages of top-notch comix. But at 350 pages, "Tricked" is still large enough to really get a feel for Robinson's story. He experiments with panel layouts and perspectives (one character's lettering, for instance, gets harder and harder to read as his mental condition worsens), and he takes rather rote characters and invests them with detailed, believable inner lives. I particularly liked the carefully created alternate history he creates for his musician figure Ray Beam, member of a pop band called "The Tricks." I halfway felt like looking up their CD on Amazon. One flaw: The overlying plot arc of "Tricked" is slightly predictable and obvious. While the storytelling is superb, I felt the tale is one that's been told many times, although Robinson puts his personal spin on it. "Tricked" is one of the better graphic novels of 2005, and I'm still keeping Robinson high on my list of cartoonists to watch. Grade: A- 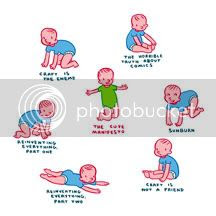 'The Cute Manifesto' by James Kochalka
"Craft is the enemy," cartoonist James Kochalka declares in one of the several essays and comic discussions collected in "The Cute Manifesto," which uses the birth of his son as a springboard for musing on art, life and how they intertwine. Rather different from Kochalka's better-known primitive goofier or more autobiographical work, it's a grab bag of comic philosophy, some of it controversial – does focusing on craft block true artistic inspiration, as he argues? I'm still not sure myself. The best pieces combine Kochalka's life with his theories, such as the focus on his son's birth. The less interesting kind of meander a bit or feel a tad pretentious (in fact, "Sunburn" was parodied by one of Kochalka's pals in an amusing minicomic, "Sunturd"). It all comes perilously close to feeling like you're trapped with a garrulous first-year art student, but Kochalka grounds his musings in his immensely likable 'cute' art style, and never feels too preachy. I don't think "Manifesto" is Kochalka's finest work - the cozy, real four-panel epiphanies of his daily Web strip "American Elf" remain his pinnacle – but it's a fascinating look into the mind of the man and certainly gives you a lot to think about. Marked down a bit for being rather overpriced at $20 (which is the same price "Tricked" goes for with much more content). Grade: B
Posted by Nik at 11:29 AM