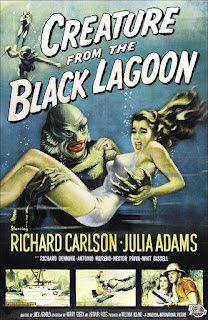 A Halloween salute to my favorite classic movie monster! I don't know why I have such a strange fascination with The Creature From The Black Lagoon. I dig a lot of the old '30s, '40s and '50s Universal monster movie ghouls, but for some reason, ever since I was a little kid, the gill man from the swamps was a favorite of mine. Maybe it's the green scales or the creepy alien look. Maybe it's the subtle theme of man vs. nature, primitive vs. society. Or just all the women in swimsuits being terrorized by the webbed menace.

The first, original "Creature From The Black Lagoon" flick, celebrating its 50th (!) birthday this year, is a classic drive-in movie monster show. Researchers in the Amazon discover the terrifying beast and try to capture it, but quickly become its pawn. The Creature's classic design still holds up well today, and the damsel-in-distress part played by Julie Adams, who spends most of the movie in a white bathing suit, is superb fun. Adams was one of my first screen crushes as a kid when I first saw this (the director almost has a fetish for her -- long, dreamlike scenes of Adams swimming in the lagoon unaware as the Creature almost -- but not quite -- grabs her dangling feet!). "Creature" is goofy, primal fun, "Beauty and the Beast" in the tropics, and a sense of isolation from the jungle setting. A memorable pounding musical score trumpets the Creature's spooky arrival each time. 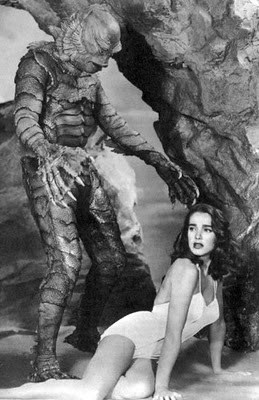 This weekend I rented the two sequels from Netflix, which I hadn't seen in many years, courtesy of the spiffy new Creature of the Black Lagoon Legacy edition DVD set. "Revenge of the Creature" (1955) was the second movie, and "The Creature Walks Among Us" (1956) the final.

"Revenge Of The Creature" is a decent but bland sequel without the menace and subliminal sexiness of the first flick. The Creature, who basically is captured in every one of these movies, gets nabbed and taken to a "Marine World" type park in Florida to be put on display. But the gill man breaks loose, and havoc ensues. There's fun in watching the Creature -- weaker and less intelligent than it seemed in the first movie -- tear up an amusement park, but it's too similar to part one, really, and dull human actors with dull human problems. The first movie felt more organic and unpredictable. Notable in a tiny cameo here is young Clint Eastwood, making his very first film appearance!

"The Creature Walks Among Us" may have the best premise of all three movies, but it's also in most ways the cheapest and least of them. It's based on the Creature being captured - again! - and through a combination of fiery accident and experimental surgery, "modified" to breathe air and adapted to be more human. The Creature even wears clothes! We get a glimpse of the theme, hinted at in the other two flicks, that the Creature is really more of a victim than a villain, and the 'de-gilled' monster at the end is a tragic, lonely figure. But, filmed for what looks like a $20 budget, "Walks Among Us" is pretty silly, recycles footage from the old movies and moves incredibly slowly for a mere 73-minute film. The idea of the Creature forced to become a man is fascinating, but little is done with it, and the movie just kind of "ends" without any real resolution. In all of these movies the human characters are pretty disposable, and "Walks Among Us" gives far too much time to the mad scientist's domestic problems with his wife.

Still, while they're no Shakespeare, I've got a soft spot for these Creature features (they helped wash the taste of the recently reviewed, abominable new Universal monster movie desecration "Van Helsing" out of my system). Unlike other '50s monster flicks like "The Thing" or "The Fly," the Creature has yet to be resurrected for a new era. That might just be for the best, though.