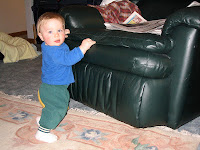 The menace of ... Babyzilla! Young Peter has made a quantum leap in development just in the last two weeks or so, hurtling boldly from the dragging crawl to the pulling-up-and-standing anywhere and everywhere he can. Once again, bookshelves have been moved, hard objects padded, and our pathetic attempt at living room feng shui has got up and gone. We live a barricaded life now, where anything we don't want chewed on or shredded has moved up into secured zones. Unfortunately, we own a lot of tempting baby targets, including zillions of books, comics and CDs that are all very tempting to Peter's palate.

Inconveniences aside, though, it's an amazing thing to watch, as the synapses congeal in his little round head and Peter discovers the delights of the world. He's so darned happy to be mobile in his halting, lurching way, as he "cruises" from couch to easy chair and sidestep-walks all the barricades. He falls a lot (and gets in the way -- Daddy managed to open the freezer door into his head yesterday and was consumed with guilt for hours, although after a bit of wailing Peter didn't have a mark). Baby "bonks," a few months ago, were incredibly dramatic. I remember his toppling backward onto his head when he was trying to sit up a few months ago and the trauma for Dad at least still hasn't quite dissipated. Now, he falls several times a day, most of the time shrugging it off with a giggle or a brief stunned look. It's amazing to think that less than 9 months ago he was in Avril's belly. Now here he is, on two feet like a real human being. Wow.
Posted by Nik at 1:24 PM