Reagan in the funnies
...One thing that's been sorely lacking in this week's effusive explosion of Reagan weepy, rose-colored memories and pageantry is what is perhaps his greatest legacy — I speak to you of Ronald Reagan's appearances in comic books.
Now, Reagan was a caricaturist's dream, all wrinkle, gleaming hair and squinty eyes. He turned up in comic strips and editorial cartoons so often you could wallpaper the Pentagon with 'em. But what of Reagan's adventures in superhero comics?
This is really just off the top of my head here, but there were a few in the gloriously gauche '80s. There was a lot of satire, such as the propaganda piece Reagan's Raiders, which "Toonpedia" does a great job of eviscerating right here. This one I never had the pleasure of reading but it sounds like I haven't missed much.
Another Reagan appearance, played more realistic, I recall was his cameo in #4 of the Marvel Comics miniseries The Falcon, written by James Owsley, now known as "Priest." This was actually a kinda cool series, I recall, but it reached a rather preposterous conclusion in the final issue, where a disaffected group of black street gang members kidnapped Reagan (this was before Homeland Security, you understand) and rapped it to him straight about the hood. I wish I still had a copy because it had a hilariously weird final scene where Reagan and his homies, along with Captain America of course, had a dialogue.
But the grand champion, the oddest of the oddball of Reaganian comic epherma, has to be this wonderful wackiness from the late 1980s run of that cult cabinet of comic oddballness, Captain America: 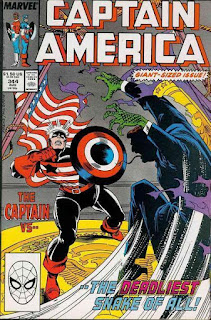 In this issue, #344, ("giant-sized," true believers!) Captain America battles Ronald Reagan, who, I kid you not, was turned into a snake-man thingie by the Serpent Society. I actually managed to hunt down a copy of the cover online, and it's a marvel, pun intended. I vaguely recall reading it back in the day, but all I remember is that Reagan got the crap beat out of him by Cap and turned back into a plain old president again. "The greatest snake of all" -- holy hannah, is there a political subtext there? If I had a copy of this today I could eBay it for millions. It may be the oddest appearance by a president in superhero comics "played straight" in modern times.
I know there must be more Reagan appearances in superhero comics, but these three are the ones that jumped out at me the most. Any others?