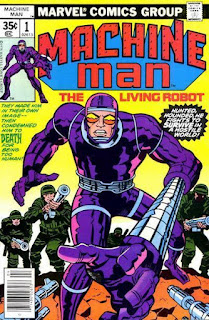 The robot-who-longs-to-be-human isn't a rare character in comic books. Among them you've got Robotman, The Vision, Red Tornado, Astro Boy, the original Human Torch, et cetera. But the one I always liked the most was Jack Kirby's Machine Man, who has had a rather inconsistent third-stringer career in comics but whom I've always been rather fond of.

Who: X-51, or Aaron Stack, was the only survivor of an experimental government program, who first appeared in the 2001: A Space Odyssey* comic book #8 by Jack "King" Kirby. (*Yes, Marvel really did try to pimp out any licensed property they could in the 1970s. There was never a Barry Lyndon comic, however.) In his own series, X-51 went on to learn about being human. Kirby's striking design - I always loved the telescoping arms and legs, such a 1970s idea of "futuristic" - was one of his great later-career works, even if the writing was sometimes a little simplistic.

Why I dig: Machine Man hasn't had the most steady character over the past 30 years or so. He was the wide-eyed naive robot in much of Kirby's original work, and a fantastic miniseries by Tom DeFalco, Herb Trimpe and Barry Windsor-Smith set in the far-future world of 2020 (!) is perhaps the character's single best moment. As Marvel does with most of their properties, Machine Man has been "reinvented" about a dozen times - he appeared in the Earth X miniseries as a cosmic watcher; he's fought Marvel Zombies; there was a short-lived "cyberpunk" version in the naughty 90s, and he was an Avenger for a while. Then Warren Ellis came along and included X-51 in his dark satire superhero series NextWave. This X-51 was a very different version, a sarcastic, snide and drunken "teenager" of a robot who refers to humans as "fleshy ones." While at odds with previous characterisations of Machine Man, Ellis' take was hilarious and kind of fit with the idea of a disillusioned idealist robot. While I'm not usually a fan of totally changing a character's personality, Warren Ellis gave Machine Man some needed edge and moved him on a bit from the "robot trying to understand humans" idea and transitioned him to "robot kind of sick of stupid humans, actually".

Read This: Kirby's Machine Man comics are annoyingly not available in collected editions, although pretty much everything else the man did is. (There's some conflict with MM's first appearance in the "2001" comic which Marvel no longer has the rights to.) But you must seek out the gorgeously drawn Machine Man series from the 1980s, and for the sarcastic twist on the character, Ellis' sneeringly satirical "NextWave" series. Machine Man has also been a guest-star everywhere from Hulk to The Avengers over the years and for some reason whenever old telescope-arms pops up, it cheers me up. Long live X-51.