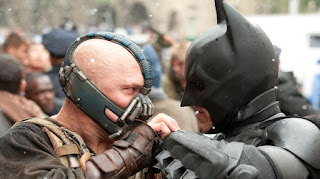 So. "The Dark Knight Rises," then.

Director Christopher Nolan's Batman trilogy has taken comic book movies to bold new places, quite dark and grim ones, mind you, but there's a keen, probing intelligence behind them. They're not as "popcorn movie fun" as "The Avengers" was but neither are they muddled attempts at "grown-up comix" like "Superman Returns" or "Daredevil" were.

I'm aware that most Batman fans haven't seen the movie yet, so I will avoid major spoilers. It's not cheating to say "Rises" picks up some time after "The Dark Knight," with Batman long missing in action and a mysterious masked mercenary named Bane (Tom Hardy) making evil plots against Gotham City. Oh, and there's Catwoman, although she's never called that here, played wonderfully by a sly and funny Anne Hathaway (who provides just about the only moments of humour in this dark tale).

I'm still chewing over "Rises," I think. I quite liked it, but Nolan's icy cool control make it a movie that's hard to hug. In case we hadn't gotten it with "The Dark Knight," in the third movie of this series Nolan hammers home relentlessly that his Batman is a 9/11 analogy. Gotham City and its protector are mercilessly tested throughout "Rises." 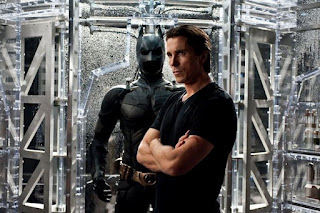 What happened on 9/11 is probably the defining moment of the last dozen years, so it's no surprise it's seeped into Batman. But Nolan also scoops up a lot of the Occupy movement's rhetoric and the fallout from the global financial crisis. He's been masterful at echoing the zeitgeist through the spandex.

However, Bane as a character is no Joker, and while Tom Hardy tries hard he's up against a fundamental problem with the mask obscuring most of his face. It's hard to get sucked into his performance like we all did with Heath Ledger. And his motivations too often sound like they're cribbed from a copy of The Anarchist's Cookbook. But Hardy does provide a great looming sense of menace.

Among the supporting cast, Joseph Gordon-Levitt is excellent as an idealistic Gotham cop who becomes quite important as the show goes on, and Bale delivers his usual sturdy work. (Michael Caine's Alfred, though, crosses over from mentor to whiner a bit too much.)

There's some great twists and turns in the sprawling plot, and Nolan delivers epic, assured action sequences like few other directors. "The Dark Knight Rises" has a scale and confidence to it that places it above most other blockbusters. And while at nearly 3 hours it occasionally lags, it wraps up with a deeply satisfying and heartfelt climax that touches on many elements of the Batman legend from the last 70 years. "Rises" won't satisfy everyone expecting a repeat of "The Dark Knight," with its repeated themes of class and revolutionary reform, but like that movie I suspect it'll hold up very well to repeat viewing. (Flash back to 2008 with my "Dark Knight" review if you like.)

I like that Nolan is willing to make his Batman about more than just a caped crusader. There's a reason Batman has endured as comics' single most popular, malleable character. Nolan's subtexts can sometimes get overwhelming, but as a whole this trilogy is a pretty masterful class in how much wealth there is in the Batman archetype. It'll be hard for whoever "reboots" (gosh, I'm learning to hate that word) Batman movies next to top what he's done.