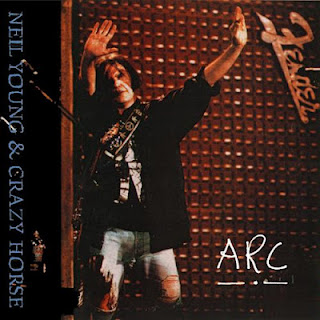 Even for the notoriously restless Neil Young, "Arc" is a weird sideline in his lengthy career. An offshoot from the fantastic "Weld" live album recorded during Young's 1991 tour with Crazy Horse, it's basically a sound collage by Young, piecing together feedback freakouts and jams from shows throughout the tour, an extended outro or intro that doesn't ever quite burst into full-on song.

Neil Young has done everything from soothing country folk to electronica to rampaging hard rock, but "Arc" is rather unique in his catalogue. It's a free-form piece of sound experimentation, way more Lou Reed's "Metal Machine Music" than "Rockin' In The Free World." Young was reportedly inspired by then-tourmates Sonic Youth and Thurston Moore in his approach to a lot of the sound of the Arc/Weld era, and it shows.

"Arc" is a kind of abandoned stepchild in the Young archives and is definitely an acquired taste, but yet I quite like to put it on and be blasted by white noise for 30 minutes or so, to kind of enjoy the scouring power of raw sensation. In some ways, it's as pure as electric Neil Young gets. I kind of imagine it's like being inside Neil's brain for a spin, all echoing feedback and crashing chords.

You can hear a lot of "Arc"'s influence in a band like slow-metal act Sunn O))), whose doomy weight is like "Arc" with added foreboding. "Arc" sweeps and washes over you, and while it's rather abrasive, I don't find it as overbearingly harsh as something like the infamous "Metal Machine Music" or Throbbing Gristle.

"Arc" does have a structure, like a flexing, tense ocean of noise -- the "song" fades and builds, over and over, snatches of a few recognisable numbers including "Like A Hurricane" and "Love And Only Love" pushing out of the chaos. There's a lot of the fierce electric crackle of raw feedback jostling with the swell of guitars, sounding like bombs going off, and it's hard not to be reminded that the first Gulf War was under way at this point in history. If anything, this is Neil's "war" record, and it aims to put you at the front lines.

Does the "concept" get old? I wouldn't put on "Arc" at a dinner party, but at just over half an hour it's no longer than some of the equally apocalyptic jams of Can or Sunn O))). I wouldn't recommend this to someone whose favorite Neil Young song is "Heart of Gold," really, but "Arc" isn't just a novelty disc. It's the logical extension of some of his most extreme Crazy Horse-led guitar freakouts, and an interesting curio in Neil Young's discography.

Here's a taste of "Arc" - the "single" excerpt released from the whole work. Put on headphones, maaaaan...