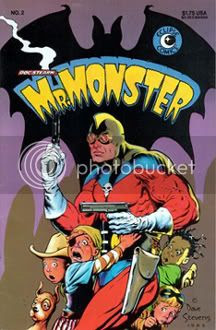 Back in the glorious 1980s of my youth, the comic book world seemed to be exploding with creativity. The independent companies were in full bloom, and the mainstream was hip-deep in the innovations of Moore, Byrne, Miller, Simonson and many others. There was a lot more diversity than we see today in the shrunken field, with Marvel and DC doing battle with dozens of smaller publishers like First, Comico, Renegade Press and more. One of my favorite outfits of the time was Eclipse Comics, who put out Miracleman, DNA Agents, Scout, and one of my most beloved rather underrated heroes, Michael T. Gilbert's Mr. Monster. Evil beware!

Who: Doc Stearns is Mr. Monster, the latest in a long line of monster killers. Picture Buffy the Vampire Slayer crossed with Hellboy with a dash of the Punisher. Gilbert actually took the character from an obscure Canadian comic appearance or two in the 1940s, but he really made Mr. Monster his own, creating a detailed history and defining the blustery, monster-hating character. After a dozen or two of his own comics, Mr. Monster settled into a role as a "host" to many of Eclipse's reprints of weird comics from the 1940s and '50s, including what I fondly remember as my very first "3-D" comic.

Why I dig: Gilbert's work is full of wit and charm, combining a kind of EC Comics campy gore and wit with some highly inventive layout and expressive Eisner-influenced art. Props also go to the essential lettering of Ken Bruzenak, which is like a secondary character in some of the stories. Gilbert's stories are highly tongue-in-cheek, with Mr. Monster and his spunky Girl Friday getting into all sorts of scrapes. A key to the stories is no matter how goofy they get, Mr. Monster remains an utterly serious hero, nearly fanatical in his pursuit of creatures of the night. There's not a lot of gray areas in the work, but a lot of clench-jawed charm. 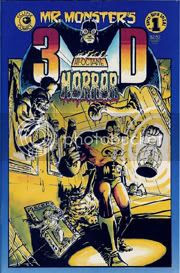 Sadly, Gilbert's monster-hunter has rarely been seen since the 1980s. There's been a few anthology series, but nothing sustained after the "Mr. Monster: Origins" miniseries that took a more serious spin on the Mr. Monster legend. Gilbert has gone on to do a lot of other comics work at Disney and DC but I wish he'd return to Mr. Monster -- there's a lot of great potential in this character yet.

Read this: Sadly it's a bit of a hunt through back-issue bins to find much of the 30-year-old Mr. Monster comics. The 10-issue Eclipse series remains his highlight, although "Origins," which is considerably darker, is also quite solid. The best starting point though is this paperback which collects #1-5 of Doc Stearns' own series, including what I might have to pick as the single best Mr. Monster tale, "The Strange Story of Hemo Boy," featuring a little boy whose head is a bottle of blood (!!). It has a more sympathetic viewpoint than some of Mr. Monster's stories and combines pathos, wit and invention into a little, blood-soaked gem.
Posted by Nik at 1:21 PM