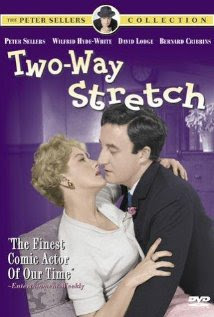 The story: "Two Way Stretch" is set in a small British prison, where life is pretty comfortable for inmate Dodger Lane (Sellers) and his cellmates. They've worked the system so cozily that they even get daily deliveries of groceries. They're near the end of their sentences, and an old criminal chum hatches a cunning plot to have Dodger and pals break out of jail for one night, make a heist, and then sneak back into jail so they can have a perfect alibi.

Who's Sellers? Dodger Lane, a small-time Cockney criminal with big dreams and oily charm, whose shameless toadying and ability to work the angles have given him a smooth time of jail.

So how is it: As one of Sellers' earlier flicks, in "Two Way Stretch" he takes a bit of a back seat to a cast of colourful British supporting actors. There's no disguises or wacky slapstick to the extent you'd see in his later films, but "Two Way Stretch" is also a showcase for how well Sellers could fit into one character. Dodger Lane is an unrepentant criminal to the bone, a lazy, self-satisfied thief who's always looking for an easy fix, and Sellers, in his "heavy" stage, sinks right into the character. The scenes of how Lane and his jail cellmates have set up a cozy little nest, complete with tea services, are quite funny, and there are some great supporting turns. But "Stretch" is also a rather thin premise for a film; although it's quite short, it feels a bit padded. 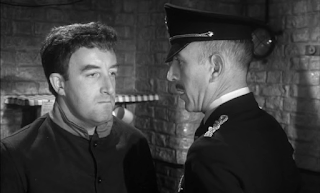 Sellers nearly has the film stolen out from under him by the late Lionel Jeffries as the constantly shouting Chief Crout, the hard-as-nails warder who takes over the undisciplined prison. Jeffries is a riot, all barely-contained rage, nearly choking on his lines. He's a prototype of R. Lee Ermey in "Full Metal Jacket," an authority figure driven mad by the slackness of his charges. Some of the other actors don't do quite as well but Bernard Cribbins is also sly fun as the aged criminal disguised as a kindly visiting priest. All in all, though, it's a fun and breezy British crime caper.