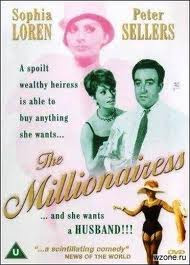 The story: Based loosely on a play by George Bernard Shaw, "The Millionairess" is the tale of a spoiled young heiress, Epifania (Sophia Loren), who is unlucky in love. She meets the quiet, altruistic Indian doctor Kabir (Sellers) and decides this good-hearted man is for her, but she has to follow conditions in her father's will that her future husband be able to make vast sums of money. Hijinks ensue.

Who's Sellers: In what would be a dry run for his Indian character in "The Party" a few years later, Sellers is Kabir, a humanitarian doctor who doesn't care about money and who finds Epifania's ostentatious wealth offputting. Playing the straight man, Sellers is a bright spot in a rather plodding movie, as he makes Kabir genuinely kind and sincere, yet a bit too idealistic to be believed. But the comedy in the movie is left to a rather shrill Loren, and his character is shoehorned into a totally unconvincing romance that never comes off. Notably, in "real life" Sellers became obsessed with the gorgeous Loren, ruining his first marriage over her. It's a shame that obsessive chemistry never really shows on screen. 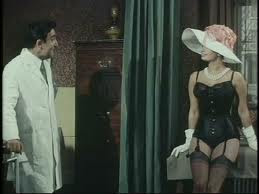 So how is it: A rather big misfire, one of those self-conscious movies where abrasive is confused with quirky. While Loren is fun to look at and utterly gorgeous, her character is a hugely unappealing spoiled brat, and Sellers is so damped down as the upright doctor that he barely registers sometimes. There's few things more disheartening than a romantic comedy where two actors with very little chemistry acting in highly melodramatic ways are shoved down an audience's throats, and that's what "The Millionairess" is. There's some moments that are amusing -- Epifania heads into a dingy sweatshop and manages to turn it into a hugely successful business in about ten minutes, and there's an enormously risque scene for 1960 where Loren strips down to her undergarments -- but the overall sluggish pace and a hit-you-over-the-head message that "money isn't everything" make this one a bit of an ordeal to sit through today. Not Sellers' best by a long shot.

Quote:
Epifania Parerga: "You don't understand, I'm killing myself."
Dr. Ahmed el Kabir: "Well, it is our common destiny, good day."
Posted by Nik at 8:15 AM