Living on the island of lost birds 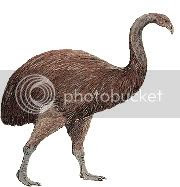 One of the things that's fascinating about living in New Zealand to me is that for most of the millions of years of its existence, it was a land of birds, and birds alone. Until the first Polynesians arrived about 800 years ago, isolated NZ was a feathered place with no native mammals. Unfortunately, between the Maori and later European colonisation, many of this land's most unique and dazzling birds were soon extinct.

Most people know about the moa, the largest bird ever to live. If you've ever seen a skeleton of one of these, it's pretty amazing to imagine a bird as tall as a giraffe. They were wiped out not long after the Maori arrived and were gone by the time Europeans came. At their biggest, they stood 12 feet tall.

But there were tons of other amazing long-gone feathered things -- the Haast's eagle -- the world's largest eagle; the beautiful black and yellow huia (right); the moa-lite adzebill; the whekau or laughing owl... I've a long list of things I'd do if I ever got my mitts on a time machine, but I think one of the things I'd love to do is see what New Zealand looked like, pre-colonization -- before the original bush was mostly wiped out, when the only thing you'd hear was a million different bird calls and imagined herds of moa roaming the land. It's just a tremendous shame to know that thanks to man's greed or man-introduced predators like rats and cats, we'll never know what a wonder a country of birds would've been.

Not all the unique birds of New Zealand are extinct, of course. Everyone knows about kiwi - which are fascinating creatures, but I tell you, there hasn't been a bird less prepared for foreign invaders since the dodo. Flightless, nocturnal, timid and nearly defenseless, the poor kiwi doesn't make it easy on itself. Another gorgeous yet terribly hapless critter is the flightless kakapo, the rarest, fattest parrot in the world -- dozens of people work long hours in the bush trying to force this exceedingly stubborn animal to mate. Living on the ground and not flying makes it hard to be a bird in the modern age.

Another native bird I discovered just a month or two ago is the beautiful kokako (right), which is a sleek grey with dazzling blue wattles and the cutest dark little cry you ever heard -- it sounds exactly like a person saying "ko-ka-ko," hence the bird's name. There's not a lot of them left, either, but we saw one at a bird sanctuary near Wellington and they're just awesome.

But hey, not all birds here are evolutionary dead-ends. My favorite New Zealand bird is the pukeko, (right) which is like a punk-rock chicken. They're gorgeous, gawky things, a sleek and sparkling blue with an orange helmet, about the size of a chicken but with huge oversized feet. They're awkward and amusing little fellows and they're as common as pigeons in many New Zealand parks. I like to think they're a reminder of what it was like in a country of birds.
Posted by Nik at 8:19 PM