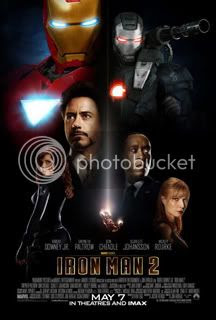 Bigger, better, more -- the rules of movie blockbuster sequels are pretty straightforward. Do what the first one did, only more so. And "Iron Man 2" definitely piles it all on -- more heroes, more villains, and it's great fun coming back to Robert Downey Jr's definitive portrayal of playboy inventor Tony Stark and his metal alter ego.
Any old-school comics geek will have a spaz attack at this movie, which is brimming over with nods to the shared Marvel universe -- joining the golden avenger here are War Machine, Black Widow, Whiplash, Nick Fury and Justin Hammer. The story lifts from the best of Iron Man's 40 years of tales and patches together a plot that revolves around a superhuman arms race that breaks out around the Iron Man technology. Iron Man's history in comics has been kind of spotty -- the best tales are outweighed by a lot of mediocrity, but this film does a nice job of sifting through for solid ideas.
And it's got a great cast.... who would've thought a few years ago that Robert Downey Jr and Mickey Rourke would headline a big summer blockbuster movie? "Iron Man 2" s elevated by quirky, fun actors who liven up the material. Can you imagine if Tom Cruise had been cast as Iron Man, as was rumoured back in the day?

Don Cheadle makes a very good replacement for Terrence Howard's Colonel James Rhodes, who gets a lot more to do to in this installment. Scarlett Johansson as the va-va-va-voom Black Widow, swaddled in black leather, may be a kind of bastardized version of the comics character (it's probably a good thing she didn't try a Russian accent), but she's great to look at. And the great Sam Rockwell, one of my favorite actors, does a fine turn as Justin Hammer, Tony Stark's mirror-image, an unscrupulous, sleazy arms dealer. As for grizzled Rourke, well, he chews every scene he's in as the tattooed, heavily accented and vengeance-minded Whiplash, and I loved it -- he's pure comic-book villain.
As he did in the first film, director Jon Favreau keeps character at the forefront. He's mixed on the action -- a sequence involving Whiplash set in Monaco is tense and gripping, but I found the climactic battle a bit wanting. Downey's Tony Stark continues to be one of the best comic character castings -- in this slightly darker sequel, we see Stark struggle with his ego, his ailments and his temptations. I don't want to spoil a great sequence about halfway through the movie, but fans of the classic "Demon in a Bottle" comics storyline will dig how it plays out. Downey keeps us aware of the man in Iron Man.
While it's a crowded movie, I don't think it generally succumbs to the overstuffed feeling of, say, "Spider-Man 3." But one flaw is that "Iron Man 2" a little too often feels like a trailer for the "Avengers" movie. While Samuel L. Jackson makes a great gruff Nick Fury, his cameos feel less plot-driven and more marketing-driven. Also, a little end-credits surprise scene hits that comic fan sweet spot but the majority of moviegoers will be baffled by it. Marvel runs the risk of making their movies as convoluted as their comics if they don't focus on story first, franchising second.
Still, I think "Iron Man 2" makes a pretty strong follow-up -- it'll make a ton of money, and I sure wouldn't mind seeing Downey (and Scarlett's Black Widow, meoooow) do it one more time.
Posted by Nik at 3:29 PM