... Why you stuck up, half-witted, scruffy-looking Nerf herder! 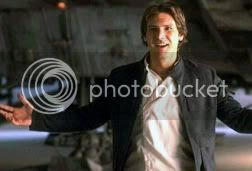 Thirty years ago today, May 21, 1980, was a pivotal day in the life of every young fella born in the '70s -- the day Star Wars: The Empire Strikes Back hit theatres. It's fair to say most boys (and lots of girls) of my age would never be the same. Wampas! AT-ATs! Yodas! Bobas! Landos! These were the things that buzzed around our brains for weeks and months afterwards.

Sadly, though, I can't quite remember my 9-year-old self's experience of actually SEEING "Empire" in theatres. I know I did, but for some reason, it's all tangled up in the kazillions of times I've seen "Empire Strikes Back" since then. I don't know for sure, but I suspect I've seen it more than any other movie. It's my favorite "Star Wars" movie, of course. Isn't it everybody's?

Thirty years on, "Empire" works because it's the best pure movie of the entire six-film epic. I'll always love the original "Star Wars" despite its hokier bits, and even the rather daft Ewoks don't sour me on "Return of the Jedi" (which I vividly do remember seeing in a packed cinema in 1983). And as for the "new" trilogy -- it's not as bad as all that, but it's a lot more soulless and plastic, I think.

But "Empire" -- well, many an armchair critic have already pointed out its merits. There's a scruffier side to "Empire" that the glossier other five movies lack -- it's there in Han Solo's snarky bantering with Leia, with the rogue Lando Calrissian, with sinister bounty hunter cameos, with Darth Vader's seemingly wholesale slaughter of unworthy henchmen. And "Empire" had the guts to end on an unashamed downer of a cliffhanger, with no promise things would be set right. (They would.) "Empire" had all the boy's own adventure fun of the original "Star Wars," but just coloured in with a little more intensity, a little more reality. Why that's lacking in George Lucas' later movies, I don't know.

Perhaps it was his script collaborators like Lawrence Kasdan and Leigh Brackett, or "Empire's" director Irvin Kershner. "Empire Strikes Back," from its glacial Hoth vistas to its soggy Dagobah gloom to its oh-so-'80s Cloud City disco skyline, is rich and full. It's so full that an entire generation of us kids saw a heck of a lot more to it than Lucas ever intended; we'd create worlds around it, guzzle down comics and action figures and nostalgia items for another 30 years to fill it out more. You'd see a lizard-man Bossk get about 1.4 seconds of screen time, buy the action figure and make up an entire cosmology around him. That's interactive entertainment in the pre-iPad age.

Nothing is ever quite as cool as it is when you're 9 years old, so maybe that's why nothing quite measures up to "Empire" for me. Without "Empire Strikes Back," it's hard to imagine growing up in the 1980s. So for that, George, Irvin, and everyone else, thanks for the awesomeness. (As Han Solo would say, "I know.")
Posted by Nik at 4:25 PM