It's never too early to think about summer music

Ahh, summer (er, in New Zealand) is near and that means summer concerts! Why, it's been months since I've gone to a gig, since my three-show-run in March of Cat Power, Iron & Wine and Wilco. But tunes lurk ahead -- the Mountain Goats have FINALLY rescheduled the show they were supposed to do down here earlier this year, for right before Christmas, and yep, the wife and I are going. Their latest, "Heretic Pride," is one of my favorites of the year and the club they're playing in is supposed to be nicely intimate.

Also today we got a look at the lineup for NZ's biggest music event of the year, the Big Day Out 2009. It's hard to top last year's stellar lineup -- Spoon, Arcade Fire, Billy Bragg, Bjork, LCD Soundsystem all in one go? With ticket prices in the three-digit range you've got to get a decent amount of value for your money, to put up with the crowds and heat and so forth. 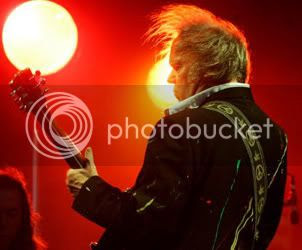 This year's lineup for the January festival gets a big plus with me with headliner Neil Young, one of my top 5 artists and one I've never seen live. He's coming with Crazy Horse so expect the loudness, and, at 62, I'm thinking I may not get too many more chances to see Neil live. So big incentive for tickets there.

Also on the bill is TV On The Radio, the art-rock Brooklyn combo whose new album "Dear Science" is way cool and I'll be writing more about soon. Another plus. But after that my interest level drops a bit -- My Morning Jacket and Prodigy would be quite interesting to see, but not enough to draw me out on their own. And I've quite enjoyed the newbie punk-pop Arctic Monkeys, although I'm not really a fan of being shoved around by people 20 years younger than me in mosh pits anymore. The rest of the bands either I'm not familiar with or don't much care about -- the Ting Tings, Black Seeds, The Datsuns and many more.

So I've got two "must-sees" and a handful of "like to see's." Does that merit a ticket? Not sure yet. But it's Neil, man. Neil. They usually announce a few more bands (I'd really dig it if the rumoured Beck would come), so I can hold off on the spending for now at least.
Posted by Nik at 10:19 AM