And here we go, another installment in my ongoing alphabetical look at the comic books that have meant the most to me in my 25+ year hobby/clinical addiction. 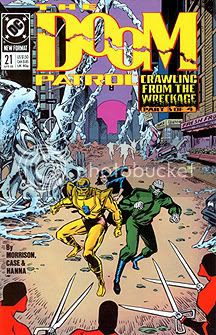 D brings us to lots of cool comics -- Daredevil, Dark Knight, Defenders. But for me, D has to be Doom Patrol. The very name is awesome and evocative, and while the comic has been kind of hit-or-miss over the years (and revived about 74 times with varying durations), when it's worked, Doom Patrol is totally cool. The DP was created just about exactly at the same time back in the 1960s as the more famous X-Men, and follow a similar template – strange superpowered "misfits" who protect humanity despite being scorned by them. The original comics are some of the Silver Age's weirdest and most enjoyable romps, but it was a revival in the late 1980s that first caught my eye, and together with his equally revelatory Animal Man of the same era, introduced me to the work of Grant Morrison.

Morrison took the idea of the Doom Patrol and twisted it into a ball of surrealism, David Cronenberg-ish bodily squeamishness and wry satire. The Doom Patrol had always been a team of freaks, but Morrison really went nuts – hermaphrodite energy beings, sentient transvestite streets, an abuse victim with multiple, superpowered personalities, living incarnations of the Dada art movement. Ideas poured from Morrison with crazy abandon and the world of superheroes never seemed weirder. The 1980s were a golden time for "revisionist" superhero notions, but Morrison took them into stranger places than anyone I think.

So. Doom Patrol #21. This is early in Morrison's 40-issue or so run, and it's when things start to get seriously peculiar. I believe this was the first issue I checked out, and typically of me, I came in at part three of a four-part story with little idea what was going on. Basically, a fictional world created by a bunch of intellectual vandals becomes real, threatening to overwhelm the real world with a bizarre mix of German expressionism, dream demons and menacing gibberish-spouting "Scissormen." Morrison's idea-packed script is brimming with throwaway lines and ideas and often has the nightmarish feel of a fever dream where anything can happen. At one point the notion of bringing Superman in to stop the invasion is mulled, but no – this is too weird for Superman. That's the kind of world the Doom Patrol live in.

One of the geniuses of Morrison's run is how he used the character of Cliff Steele, "Robotman," as the everyman perspective into his spiraling labyrinth of oddities. Robotman is a remainder from the old Doom Patrol comics, the usual man-whose-brain-was-transplanted-into-a-robot deal. But despite being encased in steel, Robotman is the most human of the entire group, and his wise-guy stunned asides (drinking game: see how many times Robotman says "Oh my god" or something similar as a reaction) provide a grounding for Morrison's explorations of the underworlds.

The early issues of Morrison's run are more "superheroey," but his ambitious tales get more and more distant from traditional expectations as his story goes on. I love 'em all, but this first glimpse at his keen imagination is still one of my favorite Doom Patrol stories. Beware the Scissormen!