I've been reading comic books religiously for 26 (!!!) years now, and I'm having great fun introducing my 4-year-old boy to 'em. (Nothing quite perks up the dormant geek in me like having him say, "Read me a superhero story!"). Thousands of comics by everyone from Kirby to Crumb, tales of characters from superheroes to gods to spacemen to unemployed bookstore clerks, have passed my eyeballs by.

So let's begin an irregular blog series taking a trip down memory lane with My Classic Comics ABCs (a tip of the hat to Comics Should be Good who I shamelessly stole the format from) – head through the alphabet with me picking out comics from my collection that have meant a heck of a lot to me in the past 26 years. Starting, of course, with A and in my humble opinion the greatest comic-book hero of 'em all... 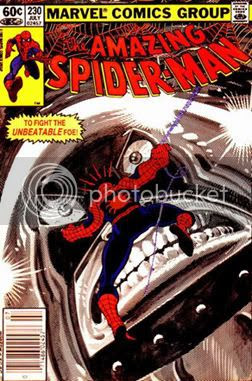 Nothing quite like coming in on part two of a two-part story, but what a part – this story is universally regarded as one of the finest Spider-Man stories in the character's 45+ year history, and with good reason. Spider-Man's swell against foes on his playing field, but what happens if you put him against someone with Hulk-like strength? "Nothing Can Stop The Juggernaut" takes one of the X-Men's classic villains and pits him against the wall-crawler, and Roger Stern's fantastic script takes a rote notion and turns it into near Greek-myth level pathos as poor Peter Parker just keeps on fighting against a seemingly unbeatable foe.

Picking this up at the Lucky's drugstore spinning comic book rack in spring 1982, I was thrown right into the action – part two, like I said, and basically the entire issue is one big chase-fight scene as the hulking Juggernaut walks out of Manhattan, with a hopelessly outmatched Spider-Man trying to stop him. Spidey uses fists, webs, construction equipment, even, in a dazzling sequence illustrated by the young John Romita Jr., a loaded gas tanker. Nothing works, until the most humble of solutions presents itself. As far as underdog stories go, this is one of the greats.

Perhaps the defining element of Peter Parker's character over the years has been that he's constantly beaten down, but always gets back up again. This story takes that element and pushes it to its limits, with crisp, clean storytelling. Roger Stern wrote a run of Spider-Man in the early 1980s that most consider among the character's best moments. For an 11-year-old kid picking up comics for the first time, it kinda felt like having the Beatles be your first rock band. I still have my battered 1982 Amazing Spider-Man #230 somewhere, and fondly recall it as one of the kindling sparks for a lifelong love of comics and an abiding appreciation for my favorite character, the good ol' Amazing Spider-Man.
Posted by Nik at 8:19 AM