My Classic Comics ABCs: Batman From The 30s To The 70s

We move on to letter #2 in my alphabetical survey of the comics that have meant the most to me in my 26 years reading 'em. B is for "Batman," and specifically, the gigantic classic hardcover collection "Batman From The 30s To The 70s," a heaping slab of comic reprints that shaped many a dreamers' life back in the day. 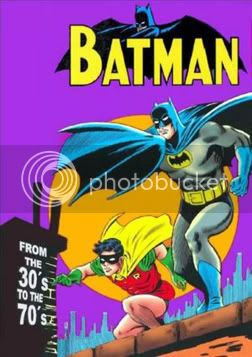 When I was a boy, I got this as a gift, and it's fair to say I was never quite the same since. Batman graphic novels could fill a library but this is perhaps the essential Batman overview, even though it only covers the character's first 30 years.

What a cornucopia of Bat-adventure this thing was. The very first Batman story from Detective Comics #27 looks crude and silly. Yet by the time the first Joker appearance comes around, the grinning clown is horrifying – and when we get to Batman battling the devilish Dr. Death in a burning basement, I was hooked.

The stories, moving through the years into the 1950s, took a turn for the lighter, which highlighted the swashbuckling fun side of Batman -- a trip back in time for "Batman - Indian Chief!", the introduction of the increasingly wacky Batwoman, Batgirl, and, um, Ace The Bathound (who actually seemed rather plausible for an 8-year-old). In "Dimension of Doom" Batgirl and Robin are riding around an alien jungle on polka-dot horse-beasts and Batman and Batwoman have become electrical creatures trapped on another world. The most terrifying notion in the story is that Batman might actually have to kiss Batwoman! Even then, it started to seem a little far-fetched.

But the final section of the book, "The 1970s," suddenly slapped you upside the head with a dunk in realism – "One Bullet Too Many," the classic 'grass roots' Batman tale where Robin moves out, off to college, and Batman abandons the Batcave and toys for a "streamlined" approach to fighting gritty '70s crime. The stories in the final section were darker, the art suddenly a lot more polished, and scary -- stories like "The Secret of The Waiting Graves" and "The Demon Of Gothos Mansion" were so stark and ominous that I remember not actually reading them for a long time, merely scanning the art with one eye, afraid of what these complex-looking tales might contain. The interesting thing about Batman From The 30s To The 70s is the stories start dark, then get lighter and more fanciful, before plummeting back to earth with the grimmest stories yet.

I read my first copy of this so many times it eventually fell apart completely, scattering Bat-pages everywhere. Picked up another copy relatively cheap on eBay (without the dust jacket, but heck, that's the way my copy always was too). A Batman who fights a maniacal Dr. Death in the shadows, then dances on giant typewriter keys while punching green aliens, and lastly chases ghosts around misty moors, all at the same time – that's my Batman!
Posted by Nik at 8:42 AM