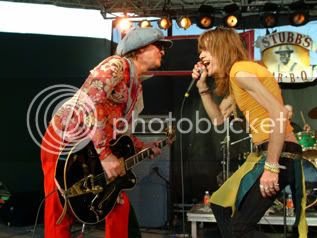 ...Holeee crap, I'm deaf. But it was worth it – legendary reunited glam/trash rockers The New York Dolls blew my mind Saturday night in their first-ever New Zealand show. It was way-cool, and one of the loudest concerts I've ever been to. My ears rang most of Saturday night and Sunday. It was the first concert I'd been to in NZ and my first since last summer's Alice Cooper blow-out, and it was great.

The Dolls are one of the icons of pre-punk rock, and their imprint can be seen everywhere from The Ramones to The Smiths to Guns & Roses. But it came at a cost – the Dolls flamed out faster than most bands, having recorded one unarguably classic album in 1973. (Their second was fittingly called "Too Much, Too Soon.") Three of the five founding members are now dead, but survivors David Johansen and Sylvain Sylvain came back together in 2004 when huge fan Morrissey sought them out for a benefit. (The fantastic 2005 documentary "New York Doll," which I reviewed a while back, tells of the Dolls' rise and fall and rise again in fascinating fashion.) 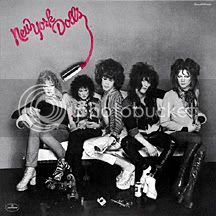 So anyway, most bands that are only 2/5ths of the original lineup might seem rather counterfeit, but hell, the Dolls rocked Auckland pretty well anyway in my humble opinion. Johansen, who looks kinda like Mick Jagger run over by a garbage truck, is a wiry, propulsive lead singer, equal parts preacher and prostitute. In his fifties, he's a lean and strutting frontman (and if you've never heard of the Dolls, you probably still know Johansen from his wacky novelty hit in the 1980s as Buster Poindexter, "Hot Hot Hot"). At the show, the diminutive Sylvain – who looks like a cross between AC/DC's Angus Young and Danny DeVito – also threw out some fiery guitar lines. And the other guys weren't bad either – that stage nearly combusted with some of the three-guitar attacks they launched. If anything, it was a little too loud, I nearly contracted tinnitus. 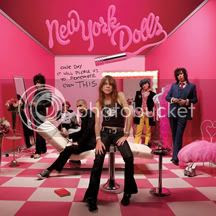 Highlights for me included their epic, jam-filled takes on classics "Trash" and "Jet Boy," a sly "Private World," and some of the excellent newer songs like "Dance Like A Monkey" and "We're All In Love." A lot of the audience – the vast majority of which were barely born when the Dolls had their first run – was lukewarm at first to the newer stuff, but the Dolls' comeback disc, the superbly titled "One Day It Will Please Us To Remember Even This," is a suitably crunchy and taut return to form for the band. And the Dolls thrashed so hard on some of the newer tunes I think even the poseurs were won over. One bummer – no "Frankenstein"! (A couple fuzzy cell-phone pics and set list for the show can be found over here, by the way. Hey, maybe that's the back of my head!)

For a band that put out their seminal work 30-plus years ago, there's still an edge to the Dolls. Their glam-rock stomp is no longer quite so threatening, but it's got a seen-it-all raffish charm. They're still authentic rock 'n' roll, not just a tribute act. Sad thing is, Tommy Lee's reality TV-shlock "rock" band Supernova played in Auckland the same night, and I bet they drew several times the crowd this show did. It was a decent crowd, but it wasn't as big as the Dolls deserved, either.
Posted by Nik at 8:20 AM