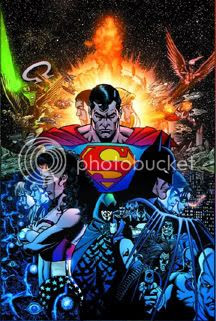 So, "Infinite Crisis." DC Comics' latest universe-ending, world-shredding crossover, with Superman, Batman, Flash, Green Lantern, Wonder Woman and all the rest tossed together with a kajillion other characters in one of those tales that will change everything we know ... or maybe not. Hey, I have a weakness for these things. I've gotten more choosy in my old age -- no "House of M" for me, thank you -- but "Infinite Crisis" looked worth checking out.

I read this book with two minds -- my fanboy mind, which is less discerning, and the more cunning critical mind. Which is weird, because I usually don't get too into lofty discussions about the future of comics, what are 'good comics' and 'bad comics' and such. I read Harvey Pekar and "New Avengers," "Eightball" and "Spider-Man," and don't really give a hoot what the trendies think. I likes what I likes.

But in reading "Infinite Crisis" #1, I kept being struck by just how insular it all was, explicitly geared to lifelong fans with intricate knowledge of all DC Comics' 70-year history. Now, that's not necessarily a bad thing. I remember picking up this series' predecessor, the original "Crisis on Infinite Earths" #5 back in 1985, the one with the cover that features dozens of heroes and villains all drawn by George Perez, with a "crowd scene" to defy all crowd scenes that features zillions of heroes meeting in the Monitor's satellite. And I thought that was way cool, a peep at an entire cosmos of comicsology I knew nothing about. I still love the original sprawling "Crisis" with a fan's unconditional adoration, and while I know it's no "Watchmen" or "Box Office Poison" or "Blankets," for guilty pleasure cosmic crossovers, it's right near the top. 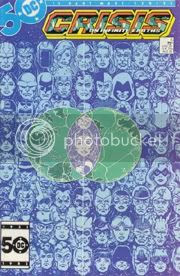 "Infinite Crisis" is basically a sequel to "Crisis on Infinite Earths," 20 years later. DC's been laying the groundwork for what feels like eons. Of the several miniseries leading into it, the only one I'd been reading was "Villians United," so I had to glean a lot from Web sites and so forth. It feels like it lacks the entry points of the original "Crisis." Would a recap page have been that hard to include? Marvel has been doing it for a while, and considering this title jumps forth from no less than SIX miniseries, comics, etc. it seems willfully arrogant for DC to assume readers know everything going in. Do they just not WANT to draw in new readers? I just don't get that.

Now, I happen to be one of these preternatural obsessives who DOES know way too much comics history for his own good, whose brain is filled up with photographic-memory recollections of every single "Amazing Spider-Man" cover and the secret identity of Hawkman and so forth, which fills up the place where useful life knowledge would go. So for me, from a fan's perspective, "Infinite Crisis" did generally deliver the goods. Many costumed figures running about, ominous speeches, deaths (Human Bomb! Nooooo!) and Phil Jimenez's great, Perez-esque art. It ain't fine art, but it's enjoyably vast in scope. However, I do feel like there's too many story threads going on - wars in space, killer robots, crazed Spectres. The story needs to be radically focused in the next issue or two or it's just going to be a sprawling mess.

The big overall story is still not quite apparent, but there's a really intriguing shout back to the old "Crisis, " with last-page appearances that truly promise some interesting hi-jinks in coming issues. I also enjoy that DC is apparently reacting to the "darkening" of its comics universe in the past decade or so, and this series may bring some much-needed lightheartedness and a sense of wonder back to a comics cosmos that has gotten a little too bleak for its own good. The fan in me likes the gist of it; the critic in me is wondering how much meat there is.