A not-exactly-review of "The Avengers"

Short review of “Avengers”: I loved it.

Longer story: I remember the crazy, epic excitement I felt when Tim Burton’s “Batman” was being filmed, way back in 1989. I clipped the first fuzzy black-and-white picture of Jack Nicholson’s makeup as the Joker out of the newspaper and carried it around for weeks. I remember waiting in line at the Sierra Cinemas on June 23, 1989 for the first showing and being dazzled by actually seeing Batman, from the comic books, on a movie screen. While in hindsight Burton’s “Batman” is more than a little flawed, it woke me up to the idea that a comic character I loved could come to life. (Yeah, I’d seen and liked the Christopher Reeve “Superman” movies, but didn’t feel the intense connection to the character I did to Batman.)

Time and again I’ve had that same weird sensation evoked by a good comic movie – in “X-Men,” seeing Wolverine pop his claws on screen, or in “Spider-Man 2,” when Spidey and Doctor Octopus have that dizzying battle on a moving train. Not every comic movie has worked – I still rage at Ang Lee’s baffling “Hulk” or the missed opportunities of “Green Lantern” or “Fantastic Four.” But when they do, they hit that sweet spot of making the imaginary seem real, for just a second. 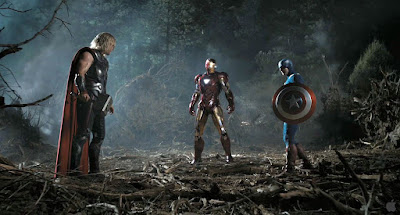 The scene in “Avengers” where it kicked in for me was when Thor, Iron Man and Captain America meet for the first time in a mountainous woods, and they fight, of course, because fighting is how superheroes meet each other. And then there’s this shot of the three of them in a moment of calm, and I was just like, yeah, that’s the Avengers, all right.

I’m a huge Joss Whedon fan and he’s done Marvel Comics freaks proud with his deeply affectionate, epic and yet witty take on the Avengers. Mashing Thor, Iron Man, Captain America, The Hulk and more into a coherent movie would be tough – this could’ve easily been a debacle of “Batman And Robin” proportions. But instead, it’s pretty darn near perfect. And while I'm sure I could nitpick - it's a bit slow to get going, the Hawkeye in this movie is not "my" Hawkeye, the army at the climax are utterly faceless cannon fodder - I'd rather just sit back and bask in that glow of a comic come to life. It’s good to know I can still feel at 40 like I did at 17 watching “Batman.”