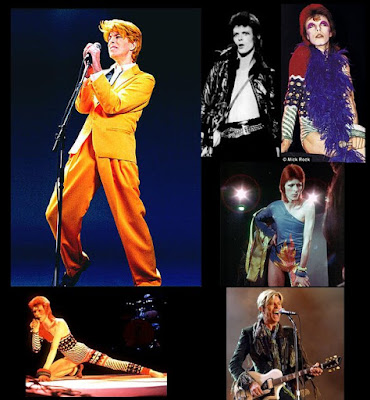 ...One thing that happens as you get older is your idols get older, too. It's hard to believe David Bowie is of retirement age today - even though he's been semi-retired since 2004 or so. I've written about Bowie many a time before on this blog. It's fair to say I'm a mega-fan, of pretty much everything from "Space Oddity" on up to "Bring Me The Disco King." Heck, I even have a soft spot for the Tin Machine era.

His "retirement" after his last studio album, 2003's "Reality," was a surprise - no melodramatic goodbye announcement or anything, but a slow fade away. While Bowie's given us enough entertainment for several lifetimes, the selfish fan in me still hopes he might come out for one last hurrah sometime - 65 isn't quite ready for the nursing home just yet.

One of my bigger musical regrets is not seeing Bowie when he performed in Portland, Oregon in 2004 on what would turn out to be his last major tour. I foolishly thought I'd get another chance to see him, and little Peter was less than 2 months old and cash was thin on the ground. But man, now I'm thinking I might've missed my one chance to see Bowie live. I've seen most of the other musicians on my "concert bucket list" but Bowie has eluded me.

If you held a gun to my head and asked me to choose between my top three musicians of all time - Bowie, Dylan and Elvis Costello - I figure I'd have to go with Bowie, whose sheer theatrical inventiveness pushes him slightly over Misters Dylan and Costello for me. Happy 65th birthday, Mr. David Jones, wherever you are - and thanks for all the memories.


Don't let me know when you're opening the door
Close me in the dark, let me disappear
Soon there'll be nothing left of me
Nothing left to release
- "Bring Me The Disco King," the last lyrics on the last album David Bowie has released to date.
Posted by Nik at 9:10 AM