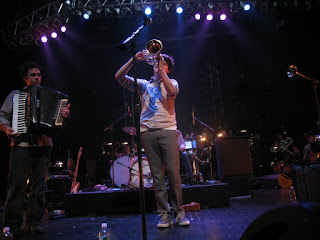 A band with rousing accordion riffs, a thundering horn section and the occasional lusty tuba solo isn't the sort of act you'd think might sell out one of Auckland's top hip concert venues. But Beirut's sound defies the expected for modern pop music. Zachary Condon, the 27-year-old face behind Beirut, looks about 16 and yet channels that old-world gypsy vibe with a timeless, epic sound that sounds unearthed from sometime in the last century.

Beirut came to New Zealand for a series of great shows this week. The six-piece act are kind of world music magpies, drawing on gypsy dance, Mexican parades, French ennui and more to create a swirling sound anchored by Condon's soulful, world-weary voice and a cascading series of horns. At the Powerstation Monday night, they managed to be both epic and intimate. (Here's a few reviews by my work cohorts at the Herald and Volume magazine far superior to my own scratchings.)

I wonder if for much of the crowd Beirut affected them like they do me -- in the iPhone/Twitter age it somehow evokes an older time, a sense of legacy which often seems lacking in our live-updates-all-the-time world. Condon's lyrics often touch on the foggy border between now and then, a constant pining for an imagined ideal past. Beirut walks a fine line - their appropriation of the past and old-fashioned instruments, and Condon's youth, might make them appear too overtly hipster precious in their approach. But there's an underlying sincerity in their mournful odes and ballads.

When "Postcards From Italy" surged up -- a song I listened to a lot during the depressing days of last fall -- I felt a kind of cathartic joy, at sad sounding music that also is full of nostalgic love. Live, Beirut transformed many of their slower songs into jaunty waltzes -- the wistful "Santa Fe," the tender "Goshen." But they also unleashed the joy that music can bring - a grand voice, an accordion gurgling, a ukulele twang, or the kick of a line of horns blaring (Beirut makes the best consistent use of horns in pop music by any band since Earth, Wind and Fire). When all three horn players blasted their trumpets, horns and tubas at the same time, it's ecstatic. The rollicking folk-pop show closer, "Gulag Orkestar," was a dizzy blast, complete with tuba solo - how many rock concerts have had a tuba solo be a crowd-pleasing wrap-up?

The "Postcards from Italy" video: