The Angel-a-Thon: Season 5, the grand finale 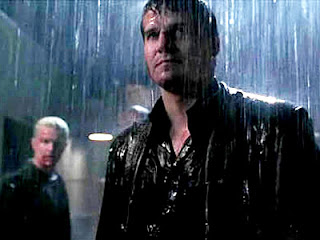 OK, it was actually a few months ago now I finished my noble goal of watching all of Joss Whedon’s “Angel” and “Buffy” series, a whopping total of 254 episodes of vampire-stabbin’ good television. I wrapped it up with the final episode of the fifth season of “Angel,” “Not Fade Away.”

After the stumble that was the confused Season 4, the final season shakes up everything and goes in several new directions. At the end of the fourth season, Angel and his friends were put in charge of their longtime enemies, evil law firm Wolfram and Hart. The entire season is basically a meaty moral dilemma for Angel and co. – if you join the bad guys, work for the bad guys, doesn’t that make you a bad guy yourself? Angel, Wesley, Fred and the rest are determined to try and turn Wolfram and Hart into a force for good, but easier said than done.

For me, much of the enjoyment of Season 5 comes from totally changing the status quo. No more dank hotel and “vampire detective,” hello heavily funded mysterious corporation and deals with the devil. Some longtime “Angel” fans squawked about this season, but it’s a natural progression for Angel’s ever-shifting moral compass. It’s also a pleasure to see Buffy’s Spike, played by snarky James Marsters, join the cast. His cocky cockney schtick may be getting a wee bit tired after so long, but it adds a nice jolt of energy to the cast.

The pathos of Season 5 echo the show’s best year, Season 3 – there’s a ton of tragedy here, from the fate of poor Fred and Wesley to Gunn’s metamorphosis from street tough to silver-tongued lawyer. A real appeal for “Angel” is how everyone constantly changes, and you honestly feel that characters can die at any time – and often do. The show did get its legs cut out from under it a bit with the open-ended finale cliffhanger (which has been followed up in an OK fashion in comic books). Yet “Not Fade Away” ends in a spectacular, damn-the-torpedoes fashion, with the final battle to top all the final battles to date and some shocking turns. 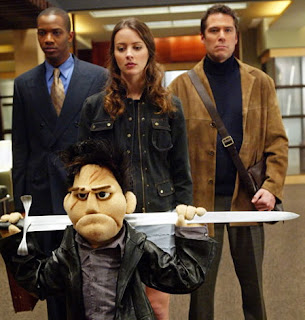 Best episode: Several to choose from, including “Not Fade Away” and Cordelia’s bittersweet swan song on “You’re Welcome” – but for sheer quirkiness and a welcome blast of humour on a dark season, you can’t go wrong with “Smile Time,” the one where Angel is transformed into a deranged vampire Muppet. Awesome.
Posted by Nik at 5:53 PM