That's one small step for baby... 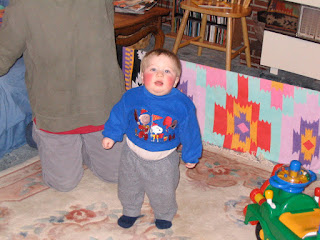 Baby Peter (whose face isn't really quite as red as it looks in this picture) took his first official step last night, or what we're counting as a step. He's been hesitantly standing by himself for the past two weeks or so (record: about five seconds), and then last night, he lifted a foot and moved it forward a few inches. Then fell on his butt. He's only 11 months old so we'll cut him some slack.

It's funny with babies; the biggest moments happen kind of gradually so you barely notice them if you're not paying attention. Like the whole "first word" thing, how do you tell when it's baby babble or an actual word? We're pretty sure Peter uttered his first non-babble word a month or so ago -- fittingly, it's "cat," or "tat" as he pronounces it. He says it only when he sees the cats so we're considering it an official sign of higher intelligence. Of course, for a long time before that he said such things as "mamamama," "eh?" and my personal favorite, "aiieeeeeeeeeeee!," but we're not sure those count.
Posted by Nik at 6:44 AM