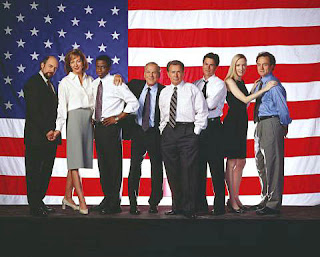 In a US election year, it’s appropriate to feel a bit nostalgic for my homeland, messed up as it kinda seems to be these days. As the plastic Romney and the arrogant gargoyle Gingrich tear each other to shreds in the Republican primaries, I kind of pine for a simpler time. A “West Wing” time.

As a big presidential history buff, I watched “The West Wing” a lot when it first started on TV in 1999, and quite liked it. Yet for some reason I drifted away from paying attention to the show in the Bush years, perhaps too depressed by the real man in the White House to watch stories about the fake one. But since I finished my “Buffy/Angel” TV travels, I was looking around for something else to dig into on my TV-on-DVD time. “The West Wing” was a good candidate to gradually revisit, season by season. It was an Emmy-winning machine back in the day, but how does it stack up now?

And watching Season 1 in 2012 instead of 1999 is quite interesting. It’s a dynamic, beautifully-produced series, given punch by creator Aaron Sorkin’s now-trademark constant babble of ideas and pithy dialogue. It’s hopelessly idealistic yet not quite starry-eyed enough to just be seen as a liberal wish list. The show hasn't dated badly, other than not really referencing the Internet age, and many of the issues - gays in the military, abortion, the Middle East - remain key today. Its fictional President Josiah Bartlet (a never-better Martin Sheen), an intellectual, well-meaning liberal who has problems connecting with Middle America, is a startling doppelganger for our own President Obama. Bartlet is a heck of a lot more like Obama than he is Bush or Clinton. The parallels came often for me, right down to Bartlet being a bit of an egghead who likes to show off his knowledge, or a “transformative” sort of President who languishes in the polls.

“The West Wing” is quintessential comfort television, breezy somehow even at its most emotional, and Season 1 is all about meeting the cast of characters in the Bartlet administration and their 25-hour-a-day lives. When it gets super-political, the show doesn’t always work, and definitely leans to the left. The show is most successful in how it portrays the always-on West Wing, with its constant bustle and characters who devote their entire life to their job. 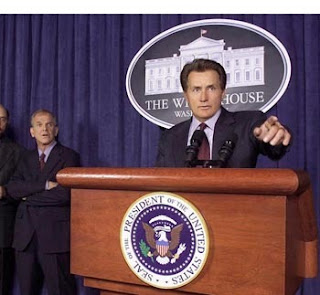 Sheen’s Bartlet is a wonderful creation, by turns cranky and messianic, forgetful and omnipotent, yet always strangely reassuring. Sorkin and crew don’t make President Bartlet flawless, and in fact he often comes off downright arrogant as in “A Proportional Response,” when grief makes the president genocidal. Sheen gives a fantastic performance, which rightly dominates the room, and it’s hard to imagine that the character of the President wasn’t originally intended to be quite so central in the series.

There are quite a few clunky bits in season 1, and it takes a while to find its tone – Sam Seaborn’s awkward relationship with a prostitute, or consultant Mandy (Moira Kelly), who is such a screechingly annoying character that it’s a pleasure to see her gradually written out into oblivion. While the interracial relationship between Barlet’s daughter Zoey and his black aide Charlie provides lots of plot fodder, it never seems convincing (when does anyone in this White House have time to date anyway?).

But although the show can get dark, it’s also often very, very funny. Allison Janney’s lovely CJ Cregg and Bradley Whitford’s wise-ass Josh Lyman deliver most of the humour. In its first season, “The West Wing” reflects America, but it’s a far more charming and engaging entertainment than the constant partisan battles in real-life Washington are these days.

Email ThisBlogThis!Share to TwitterShare to FacebookShare to Pinterest
Labels: the US of A, TV, West Wing