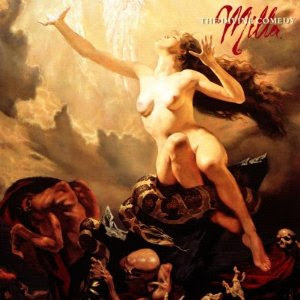 There’s no reason this album should be any good, really. It’s by a former supermodel-turned-zombie-movie-actress. While Milla Jovovich has carved out a lucrative career in movies like the “Resident Evil” series and “The Fifth Element,” her 1994 debut album – and only one to date – would seem the kind of vanity project that has little to recommend it. Actors who think they’re singers clutter the used CD sections of the world – Bruce Willis and Eddie Murphy, I’m looking at you.

But here’s a surprise. Milla’s “The Divine Comedy” is actually quite good, a heavily atmospheric sampling of folksy world music pop that carries a distinct, pleasant voice. Milla pays homage to her Ukrainian homeland with an album full of mandolin, dulcimer, and cascading synthesizers. There’s an aura of blissful lovesick reverie and girlish confusion throughout many of the songs (not surprisingly, as she was only 18 when the album came out). Numbers like “Gentleman Who Fell” or “You Did It All Before” don’t sound like a lot of the other mainstream music that was coming out in 1994, and that’s what’s kept “The Divine Comedy” sounding pretty fresh years later.

There’s a gentle pastoral, broken-hearted feeling to the album, but Milla’s emotive voice and constantly surprising and rich instrumental choices keep the album ducking cliché. You can hear a heavy Kate Bush influence in her work, and the sounds of artists like Beth Orton and Tori Amos peeking around the edges.

I’ll admit I was drawn to “The Divine Comedy” by the fanciful nude portrait of Milla on the cover, but this album offers more than celeb-spotting. While I don’t imagine it sold very well, it had a decent critical response and it’s a bit surprising that in the 18 years since Milla never put out another proper album. But while this is an obscure record, it’s got a devoted fanbase -- and the mere fact I’m still listing to it fondly in 2012 is a sign “The Divine Comedy” had a happy ending.

The ‘Gentleman Who Fell’ video: