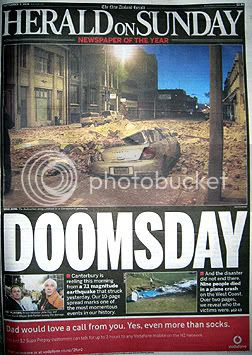 So we had a magnitude 7.1 earthquake down here yesterday morning, the most damaging in New Zealand in about 80 years from the looks of it. It didn't hit anywhere near us in Auckland, but about 500 miles south in Christchurch on the South Island, NZ's second biggest city. I visited there for the first time a year or so ago and it's a really beautiful city with great buildings, and am sad to see how torn up it's been -- though thankfully, no loss of life reported so far.

Because I'm lucky, I was actually awake at 4.35 am Saturday when the quake hit -- I work at danged early hours on Saturday mornings. Didn't feel it in Auckland, although by (perhaps) freakish concidence, at almost the exact same time the giant glass front door of my workplace shattered into a million pieces. We were having a ferocious gale-force windstorm up here at the time so I can't say it was the earthquake that caused it, but then again, who knows if it wasn't a factor?

It is a vivid reminder that we here live right on the Pacific Ring of Fire, which isn't just a Johnny Cash song but the most active geothermal zone on earth. NZ straddles a continental shelf and the entire country is dotted with volcanoes, thermal vents and more. Our home of Auckland has literally dozens of theoretically extinct volcanos (used as Maori ancient pa, fortresses). In our harbour is a giant looming volcano island, Rangitoto, which erupted out of the ocean not 700 years ago, which is a mere eyeblink in geological time. It's hard to imagine the sheer chaos a giant volcano in the nation's biggest harbour would cause if it popped up today.

Peter, 6, was a bit freaked out by all the earthquake coverage on the TV last night and can't say I blame him. Growing up in California earthquakes were a constant fear too. My thoughts go out to all those down south affected by this billion-dollar disaster, and it's a stern and worrying reminder that when it comes right down to it, the human race are mere visitors on a playing field of immense natural forces far more powerful than we are.

• In other quake coverage, Arthur talks about disasters and social networking (I too got a flurry of anxious Facebook messages yesterday).