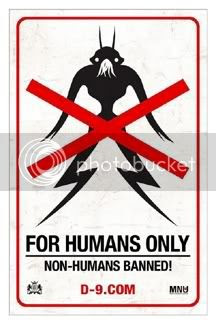 This is shaping up to be a fine year for science fiction on film, with "Star Trek," "Moon", James Cameron's promising "Avatar" and now, the paranoid and dazzling "District 9." (If you think fluff like "Transformers 2" and "GI Joe" count as true science fiction, I can't help ya).

Twenty years ago, a giant alien spaceship came to earth – and mysteriously stalled out, right over Johannesburg, South Africa. Over a million vaguely insectoid alien refugees were found on board, malnourished and confused, with no idea how to start their spaceship again. The "prawns," as they came to be called, seem slow and unintelligent, compared to the technology they came with, and have ended up forced to live in the shacks that form the ghetto of "District 9." The aliens and humans of Johannesburg have uneasily coexisted for years, but now relationships are getting worse.

A kind of mock documentary (at the start, at least, although the movie sort of loses that point of view as it goes), "District 9" follows eager, genially oblivious and arrogant government flunky Wikus van der Merwe (Sharlto Copley), who is directing the resettlement of the 1.8 million aliens out of Johannesburg to a new home -- basically, a concentration camp. I can't reveal too much about the movie without spoiling the entire plot, but suffice to say things for van der Merwe go horribly awry, and he ends up on the run and forced to turn to the "prawns" for help. What happens next is both terrifying and dismaying -- let's just say humanity doesn't come in for too good of a light in this movie. It's hard to imagine it showing us people in a less flattering light, actually.

"District 9" is a movie starring and about South Africa. The apartheid metaphor pretty much hits you over the head, but the obviousness of the allegory doesn't distract from how well done it is. It's the age-old story that could be the plotline for the human race – meet someone different, spend your time destroying them in as humiliating a fashion as possible. I can't think of another big-budget movie set in South Africa that opened at #1 at the box office, and the setting, alien for most westerners, is part of what makes "District 9" seem fresh.

Director Neill Blomkamp, with his debut movie (which was produced and helped to screen by NZ's Peter Jackson) is a talent to watch – "District 9" has amazing special effects for its paltry $30 million budget, and his story combines satire, action and splatter-movie horror, like a kind of combination of "Alien Nation," "The Fly" and "Planet of the Apes." The alien "prawn" are revealed slowly, but by the end of the movie they become fully realized characters -- indeed, more human than some of the people seen here.

For what's basically a very dark, grim future, "District 9" is tremendous entertainment. Acting unknown Copley is superb as van der Merwe, whose predicament is both horrifying and captivating. It's not without a few plot holes, but the narrative is so propulsive that I didn't mind too much. It's good to see science fiction like this that takes chances.
Posted by Nik at 6:11 PM