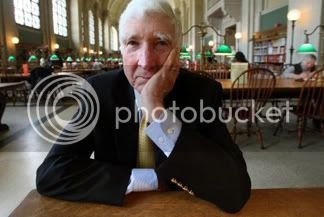 John Updike is dead, and I think today the title of America's greatest living writer is vacant.

I first discovered Updike right around my freshman year in college, when I tackled his "Rabbit" novels one after another, chewing them down like the best meal you ever had. Probably it was around then that I really started to realize that I wouldn't mind spending a great deal of my life ahead reading books like this, that "literary" books, the fancy kind you usually read for school rather than for fun, could transform you a bit. The "Rabbit" series follows the life of one Harry "Rabbit" Angstrom, former basketball star, from young and married to aging and retired over four utterly amazing books, one for each decade from the 50s to the 80s. Every five years or so, I take these books down from the shelf and read them again, because I've discovered that the older I get the more I discovered about Updike.

I wrote a lengthy term paper on one of my favorite of his books, the underappreciated "Memories of the Ford Administration," the research for which was like taking a bath in Updike. I wandered around the thickets of his sentences, casting about for clues that fit my thesis. And during college, I read a lot of Updike -- the fine short story collections, each piece a honed little diamond, the dense novels, the constantly curious and questing non-fiction. As he aged he began to branch out into material like quasi science-fiction ("Toward the End of Time") and Shakespearean riffs ("Gertrude and Claudius"). Always, a keen intelligence animated his work. When I first read Updike, I constantly got the feeling of being stunned about how one man could know so much, have so many words in him.

My father-and-law and I were just talking about him the other day, and I loaned him a copy of Updike's remarkable memoir "Self Consciousness" to read. Such was his remarkable prolificness that I could never quite keep up with Updike's output -- there's probably still a dozen of his 50+ books I haven't read. Plenty of company to keep in the years ahead when no more books are forthcoming.

Goodbye, Mr Updike, and thanks for the words. From "Rabbit Run":

"His hands lift of their own and he feels the wind on his ears even before, his heels hitting heavily on the pavement at first but with an effortless gathering out of a kind of sweet panic growing lighter and quicker and quieter, he runs. Ah: runs. Runs."
Posted by Nik at 8:00 AM