My classic comics ABCS: Give Me Liberty

G was a hard one. As you might vaguely recall, I've been working my way alphabetically through the ol' comics collection, picking out one of my favorite comic books for each letter, and there was usually an abundance of choices for each letter -- until I got to G. While there were lots of good comics starting with a G -- Groo, Green Lantern, Green Arrow, Gumby -- nothing really leapt out at me to write about. But then I remembered "Give Me Liberty". Given the whole recent wind-up of the political season, this tale of a future America gone wrong and trying to redeem itself seems particularly apt. 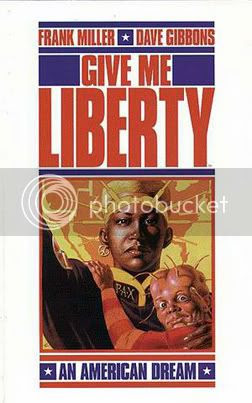 A gem with the words of Frank Miller and the art of Dave Gibbons, "Give Me Liberty" boasts a heavy pedigree. Yet it never quite seems to get the acclaim of Miller's "Dark Knight Returns" or Gibbons' "Watchmen." Still, it's a heck of a fine satire. Martha Washington is a young black woman who overcomes impossible odds to become a military hero in a collapsing America. All kinds of horrible things happen to Martha as she cavorts through wars and conspiracies, but she never gives in. Unlike the invincible Marv of Miller's "Sin City" or the aging Bruce Wayne, Martha seems a bit more human despite her tortures.

It's quite strange now, to re-read "Give Me Liberty" and realize those far-out future dates Miller has set his story in are here, or nearly here. Reading it back in the early 90s, seeing the years 2009 and 2010 pass by still had the tang of mystery. Like "Watchmen," "Liberty" is packed with tiny details that fill out its elaborate imaginary world -- the barely-glimpsed table of contents of a "This Week" magazine from January 2009 (!) shows tantalizing glimpses such as "Australia's Aborigines revolt" and "zero gravity surgery."

Miller didn't foresee 9/11, or exactly what the world would become, but he did imagine a world where factionalism takes hold, where America breaks apart into separate nations, such as the American Indian renaissance in a blasted southwest. In my mind, the satire here works far better than it did in "Dark Knight," where the talking heads TV antics always seemed a sideshow to the story. Here, the multi-media interruptions and expositions are integral to the world of Martha Washington, with the advent of the Internet heavily foreshadowed. Despite the brutality, assorted nuclear mutants and holocausts, "Give Me Liberty" is a fundamentally optimistic series.

Miller's trademark blend of tough-guy talk and way over-the-top action is running at a high here, coupled with the typically stunning art of Gibbons. (Miller is very good at keeping the script tight when it needs to be and just letting Gibbons' art tell the story; it feels more like a partnership.) After "Give Me Liberty," Martha Washington came back in a series of elaborate sequels with diminishing returns, but the original is still a fresh, startling take on sci-fi with a kind of hero who's still, sadly, rather unusual in genre fiction. (Quick -- name three other black female women sci-fi action heroes.)

"Liberty", too, foreshadows the change Frank Miller's career has seen from more traditional noir action into broad, sometimes too broad satire. "Liberty" came after the whole Dark Knight/Daredevil/Elektra run of the 1980s, his most mainstream superhero work, yet pointed toward his work like Hard Boiled and "Sin City"; it also had some of the clenched-jaw excess that has marked series like "All-Star Batman" or his bizarre "Dark Knight" sequel. (The demented Surgeon-General villain would fit just fine in "All-Star Batman.") It was a crossroads in his career; one could argue all night as to whether his career has peaked since or not, but "Give Me Liberty" is still a high point in Frank Miller's comics legacy.
Posted by Nik at 4:15 PM

Email ThisBlogThis!Share to TwitterShare to FacebookShare to Pinterest
Labels: My Classic Comics ABCs