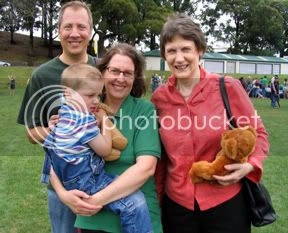 The marvelous thing about New Zealand is that it is such a small country, that you can find yourself just meeting the Prime Minister one day. We were at the Teddy Bears Picnic today, a kids' carnival benefit, and happened to run into Prime Minister Helen Clark popping by for a visit (complete with her own teddy bear!). We have met one of her aides, Joan, a couple of times as she's a friend of my wife's family (and my in-laws have met Clark many times at Labour Party functions), but it was the first time I'd met Helen Clark herself, who's been New Zealand's leader for nearly a decade.

It was interesting to compare it to the United States, where you're lucky to get within a mile of a President and not too likely to come across them at a smallish county fair-type event. She only had two bodyguards (the sunglasses and earphones give them away) and a small entourage, and we had a couple minutes to chat with her. She seemed quite nice, asked about Peter's daycare and how I found New Zealand, and hopefully I didn't come off as too much of a doofus. Anyway, now I can say I have indeed met New Zealand's Prime Minister -- and unlike our current American chief, I'm kind of happy to have her as the boss.
Posted by Nik at 5:49 PM