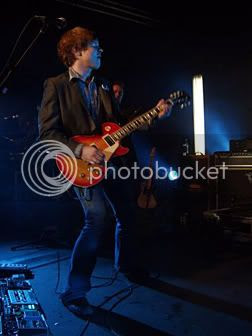 ...If Ryan Adams ever writes an autobiography, it oughta be called "Beautiful but Frustrating." That's kind of how I felt after an often-stellar, but sometimes fumbled show during Ryan's first appearance in New Zealand. Ryan Adams has been putting out a prolific slide of country/rock albums for years now; his 2002 masterwork Gold is right up there on my top albums of the '00s list. But drug addiction, a fiery temper and other problems have nearly derailed his career. (A recent New York Times article about the newly sober Ryan was titled "Ryan Adams didn't die. Now the real work begins.") He's cleaned up now and back with one of his best discs, the mellow and tuneful Easy Tiger.

But I have to admit Ryan's dubious live reputation – fights with the audience, etc. – left me a little uncertain about seeing him up at a nice little intimate theater in Auckland's North Shore. The band, The Cardinals, was fantastic, and Ryan proved he can sing and play guitar with the best of them. His folksy anthems were spun out into sprawling psychedelic Americana gems – it was a bit like an Allman Brothers show spliced with a hint of Replacements.

And when Ryan and the band were on, they were on fire – I was knocked out by a lengthy jam on "Magnolia Mountain," a Grateful Deadsian ode that might just be my favorite Adams song. "Goodnight Rose" off his latest got a fantastic take, and older tunes like "Beautiful Sorta" and "Cold Roses" also were great. I really liked him digging up a revamped version of "Is This It" from his underrated '80s rock homage Rock N Roll. 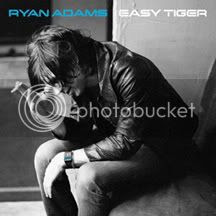 But a slack performance ethic marred it for me – I can understand taking a break after the first two songs to fix what appeared to be technical difficulties, but then another 15-minute break after only 40 minutes or so of music (apparently to take a cigarette break) really killed some of the momentum for me. Then, because the venue has a curfew, there was no encore when the show wrapped up – which they could've done if they'd only started on time and hadn't taken all those breaks. Ah well. It was interesting comparing it to Bob Dylan, who I saw Saturday – his show was far more professional and polished, although I have to admit Ryan trumped Dylan in soulful passion.

But what really irked me about Ryan's concert was the hideous lighting, something I've never had to complain about for a rock concert. For most of the show the stage was bathed in this awful blue-black hue that made everything obscured in shadow. It got a little better but this artistic decision meant we spent most of the show watching Ryan and his band trying to actually see Ryan and his band. People were actually shouting from the balcony to turn the lights up, but no avail. I just don't get why Adams doesn't want the audience to see him play. (I had to compare him afterwards to the superb opening act, Kiwi singer Anika Moa, who was totally awesome, funny and engaged with the audience. And she had the best ad-lib of the night, "I'd knock you out with one tit, mate." Guess you had to be there.)

If it sounds like I'm moaning, it's because this nonsense turned what could've been a great show into a merely quite good one. (And that fantastic take on "Magnolia Mountain" is still ringing in my ears.) Adams is still one of my favorite current musicans and a man of immense talent. It's just a little frustrating, is all.
Posted by Nik at 8:37 AM