Diary of a stay-at-home Dad, week one

So we're at the Friday of my first week as Mr. Mom, boldly sacrificing the world of deadlines, coffee and, y'know, working to stay at home with my 2 3/4-year-old son whilst darling wife resumes life in the Kiwi workforce. Can a former editor become a doting dad? Can I handle the notion of not working for a few months until I get my New Zealand sea legs (and we adjust to the notion of some kind of day care)? 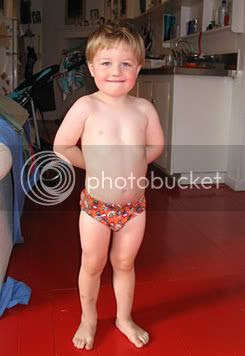 Any notion caring for a rambunctious toddler isn't work is of course nonsense. For the past couple years, I think Avril had the harder job. That said, it hasn't been the perfect week, but it's been pretty good. Peter is a little befuddled by the absence of his mama, who's been a constant presence in his young life till now. He's acted out a little (worst offenses: ripping pages out of a brand new library book and biting his cousin on the toe. Argggggh), but is starting to settle down and not asking "where mama?" every five minutes. He apparently is under the impression she works at the post office, because he says, "she a mailman now."

The best part is watching the baby turning into a boy; he's nearly through with the nasty bizness of toilet training, having sped through the last two weeks of hardcore action from using a mini-john to now using the real grown-up toilet, and not having an accident all week. And he now wears BIG BOY underpants! (Seen above) Yeah, I'm at the point in life where I'm excited by a mess-free bowel movement. I am so domesticated.

While Peter has never been a napper – or much of a sleeper – he's taken to it this week, napping 3 of the last 4 days. I rock. Our routine is usually some kind of expedition in the morning, then lunch, then maybe a trip to another playground or something in the afternoon. One of the awesome things about Auckland is there's parks everywhere – at least a half-dozen within close walking distance of here, and we usually have the car during the day if we want to venture further.

P's an incredibly active, and if I may say so, smart kid, which is sometimes to his detriment – he gets so hyped up and overworked that it's hard to bring him down sometime. I'm wondering if he'll always be like this and end up some BASE-jumping windsurfing adrenaline junkie, or if he's going to mellow with age. So much of the challenge is coming up with ways to entertain him.

The big thing for me is realizing how lucky I am to get this time with P, rather than champing at the bit to work again or explore more. Writing and the journalism life does get in the blood, after all, so part of me worries I'm wasting time, that I need more than occasional freelancing or blogging to satisfy me.

But then Peter runs up and gives me an unsolicited hug, and all's cool for a little longer.

Happy Thanksgiving, all you American-types!
Posted by Nik at 8:19 AM