Music: Rockin' out to some music lit

...So I've been on a big rock history book-reading kick lately. I know the old saw that "writing about music is like dancing about architecture," but what can I say, I dig reading words about music and lately books about tunes, the people who make them and the ideas behind them have been constant reading for me. The Auckland Library has a pretty awesome selection so I've been regularly raiding their music aisles for books I've always meant to read. Here's some of what's been passing through: • "Awopbopaloobop Alopbamboom: The Golden Age of Rock," by Nik Cohn. This 1968 tome (revised somewhat in 1972) is called the granddaddy of modern rock criticism, written, to my envious chagrin, by Cohn at the pup's age of 22. It's basically the entire history of rock 'n' roll from Bill Haley's "Rock Around The Clock" to the death of Jimi Hendrix, of 15 or so years where rock soared in scope and imagination. Cohn was there for a lot of it, one of the first "rock journalists," and "Awop" (I ain't writing that whole title again) is a kind of love letter and farewell to it all, written as Cohn imagined himself burned out by rock and moving on. It's smooth, sexy writing, with lots of great little turns of phrase. I don't always agree with Cohn, who's cool to the Beatles and Dylan (!!!) while sticking up for Little Richard. Is "Awop" dated? Definitely. Cohn froze music in 1972 and felt that the end was nigh, that pop would only flourish if it were directed to teen angst and didn't get wrapped up in its own pretensions. It's hardly encyclopedic, because although Cohn tries to cram in as many names as possible he often relegates entire careers to a few sentences. Yet all that didn't bother me too much, because "Awop" is so obviously an artifact of its time, and Cohn's authorial voice is so relaxed and chatty. He's sometimes arrogant, often irreverent, but never really condescending, even when he disses The Beatles. Most importantly, Cohn was one of the first to really take rock seriously as the idea for a subject of a book. There's an entire industry of such tomes today, but nearly 40 years ago, it was unheard of. "Awop" is a groundbreaker that's still worth paging through today. 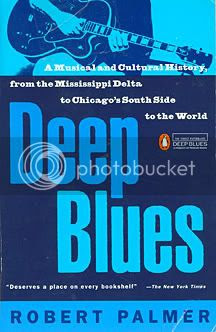 • "Deep Blues: A Musical And Cultural History of the Mississippi Delta" by Robert Palmer is one of those books I've always meant to read – an examination of the Mississippi "Delta Blues," where it came from and who it influenced, and a look at the lives of characters like Muddy Waters, Sonny Boy Williamson, Charley Patton, Robert Johnson and many more. I spent seven years down in North Mississippi at college and it took me until the final years of my stay to develop a real appreciation for the blues (thanks mostly to Oxford-based Fat Possum Records and such icons as the late R.L. Burnside). Anyway, "Deep Blues" is a fascinating piece of musical archaeology, taking a look at the truths behind the myths of the blues. We all know Robert Johnson sold his soul to the devil at the crossroads to earn his musical talent, but what was the man really like? Palmer actually got to sit down and talk with many of the blue icons featured here before they died, including Muddy Waters, so the history here feels alive and vivid. (One of the men featured in the book, Robert Lockwood Jr., died just last week at the age of 91.) You've got harrowing tales of plantation existence, how music became an escape for some, and how the Delta blues ended up migrating to Chicago. Palmer traces the blues back to its African roots, then brings it right on up to its mutation into rock 'n' roll in the 1950s. "Deep Blues" evokes the mystery and strange menace of the blues and that's a welcome antidote to the notion that they began with Eric Clapton. 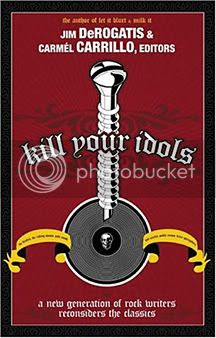 • "Kill Your Idols: A New Generation of Rock Writers Reconsiders the Classics," edited by Jim DeRogatis and Carmél Carrillo. Blogger Lefty recommended this one recently so I checked it out – the conceit here basically being that it's an entire book of negative reviews of allegedly classic albums, from "Sgt. Pepper's Lonely Hearts Club Band" to Wilco's "Yankee Hotel Foxtrot." DeRogatis assembled a lineup of writers to pick an album they consider overrated and tell us why. It's a nifty idea, even if it doesn't always work. "The point isn't necessarily to change your thinking about a work that you adore, but to prod you to consider anew why you admire that work," DeRogatis writes in his introduction. At the very least, "Kill Your Idols" gives you a lot to chew on. The best essays are the ones where the authors levy solid musical knowledge in their thoughts, and might even be fans of the artist's other work – Fred Mills is a big Neil Young admirer, but disdains Young's hit album "Harvest," and gives pretty good rationale for why he thinks it's a "meandering, unfocused affair." Some are wickedly funny, such as the cruelly biting evisceration of The Doors (an act I admit I can't really stand myself) and Jim Morrison's "lounge tune sophomore poetry." A few too many of the essays take the lazy stance that rock can't strive to be "art" and still rock, which I don't agree with myself, that rock has to be messy and raw to matter. And some are just written with such overwhelming bile toward the artist that they're hard to respond to. If the thesis of your argument is that the artist "just sucks," then sorry, I'm not really following along with your wisdom. Still, "Kill Your Idols" is a pretty breezy read that is enjoyable if you don't take the opinions therein as gospel, which after all, is kind of the point. If you can't handle dissenting opinions to your own, skip it, though!
Posted by Nik at 9:00 AM