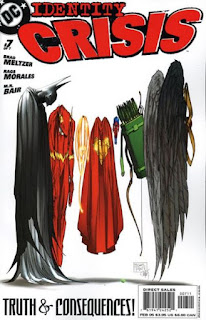 Alert for the uncautious -- SPOILERS LURK, by gum!

Wow, what a huge disappointment this issue is. The most disappointing comic book epic conclusion since... well, since Brian Bendis's equally incompetent but less odious Avengers #503 last month. Not a good year for world-changing overhyped storylines. Thing is, as I've said before on this blog, I've enjoyed the first 6 issues of this "whodunnit" murder mystery set in the DC Comics universe, but parts of it -- the unsettling violence toward women, the sense this might come to nothing -- left a bad taste in my mouth. I held out hope it would all come together in a powerful, sensible ending.

Enter #7. The killer of Sue Dibny, the mastermind behind the murder of Jack Drake, is revealed and ... it's Jean Loring (who?), the ex-wife of the Atom, who's gone all crazy because she can't get enough of that Atom love, and who "accidentally" killed Sue Dibny in an attempt to drive the Atom back into her arms by spreading fear and discontent among the loved ones of superheroes everywhere.

That sentence sounds like poorly written fan fiction, doesn't it? It's hard to believe this issue is written by the same Brad Meltzer. How hard is it to end a story well? The climax here is insulting, contrived and inconclusive. It feels like a trailer to an inevitable sequel, "Identity Theft" or somesuch, so many plot threads are left untied. Never mind the countless red herrings that come to absolutely nothing here, including the highly controversial rape and "mindwipes" we saw several issues earlier -- those have absolutely nothing to do with the murders. Clear out the filler, and about 50% of the plot over seven issues actually goes somewhere. The sheer cynicism that oozes from every page of this series is stunning.

And then there's the misogynism. I don't raise that charge lightly, and refused to jump on the "DC hates women" bandwagon that some folks were on from the start with this intense series. But looking at the whole, how can you NOT see it? A woman is beaten, burned and killed in #1; in #2, to top it all off, we learn she was pregnant, oh, and by the way, she was raped once by a supervillain. In #7, we learn the culprit is ALSO a woman, driven crazy because her man done left her. (Never mind that in comics I've read over the past 20 years, the Atom's wife has actually been shown to be a pretty stone-hard chick who actually cheated on the Atom and left him, ending their marriage. Not the type to suddenly go wacko with remorse.) I'm not saying Meltzer's a misogynist, because I can't read the man's mind, but the comic is certainly not women-friendly. And they wonder why few women read comics.

I don't mind "dark" comics. Some of my favorite superhero comics have taken a dark eye to the cape genre. But this is WALLOWING, gratuitous and over the top darkness, darkness that sheds little light on the theme. What irks is there is talent behind "Identity Crisis." I've found the first six issues entertaining in their knack for juggling suspense, some very nice character moments and dialogue, and some dynamic art by Rags Morales. But the ball gets dropped hard here, so hard that my very faith in good superhero comics -- and I'm a believer, honest -- is a bit marred. Grade: D- (the pictures are pretty)
Posted by Nik at 4:45 AM