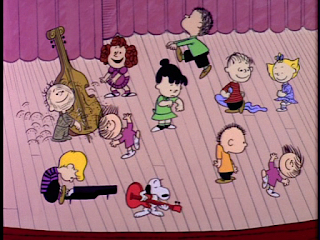 Found myself hypnotized into watching the 5,423rd airing of that venerable holiday chestnut, "A Charlie Brown Christmas," last night. This toon has been on TV longer than I've been alive -- coming up on its 40th anniversary next year! There's something highly comforting about this old "Peanuts" special, in its cheerful almost anachronistic squareness.

Watching it last night for the first time in years, I realized how quiet the humor is, even when Lucy's yelling at Charlie Brown. It seems world away from most of today's cartoons and anime, like something from a time capsule. The classic smooth jazz music of Vince Guaraldi bubbles constantly in the background, giving a mellow vibe to the whole show. The kids sound like real kids, rather than trained voice actors. The animation is limited, but effective, and the story -- the kids try to put on a Christmas pageant -- is really just a framework for a lot of reworked gags from the original comic strips to be portrayed. (And some wayyyy goofy dancing to the rockin' piano sounds of Schroeder, shown above.) It's got a message few Christmas toons today would dare, about avoiding Christmas overcommercialism (never mind the irony that "Peanuts" characters have been used to sell everything from pillowcases to insurance) and finding love in the humblest of places. Schulz's bleak, dark humor was always hidden by his cute little kids and dogs, but the cartoon still seems quite cynical, almost, under its colorful skin -- the scene where everyone laughs cruelly, unsparingly at Charlie Brown's Christmas tree pick, for example. I still dig Charlie Brown picking the littlest, shriveled Christmas tree and making something of it, and admit to even trying to buy less-than-amazing trees myself in the past to be follow Charlie Brown's example that it doesn't always have to be bigger, better, more expensive at Christmastime.

Some fun 'behind the scenes' trivia on the special can be found here -- it's interesting to note that the special was seen as oddball, too religious and strange, even back in 1965. It's one of a kind, and great to see that in the age of "A Clay Aiken Christmas" and action figure-selling cartoons that TV can still find an hour to spare each year for good ol' Charlie Brown.
Posted by Nik at 10:22 AM