So I finally got the 300th and final issue of Cerebus today, in my monthly shipment of comic books.
It was, like most of Cerebus for the past 10 years or so, a combination of beautiful craft, comedy, infuriating digressions and incomprehensible gibberish. I closed the book and thought about what Cerebus meant to me, and why it failed in many ways.
For those not in the know, Cerebus was a comic book by Canadian Dave Sim, begun in the late 1970s and continuing 'til just last month. Over 6,000 pages in 300 black-and-white issues, Sim told the tale of the aardvark Cerebus, who began as a kind of Conan the Barbarian parody, but eventually it turned into a tale spanning decades in the life of Cerebus, as he became a politician, a pope, a lover, a madman, a bar owner and much more.
It was a fascinating tale, but also deeply flawed in a lot of people's eyes as Sim's controversial views on women, religion and more became a bigger and bigger part of the book over the years. 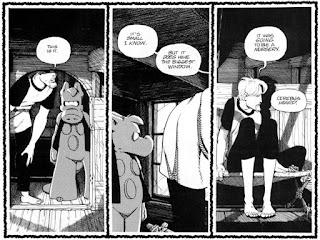 Cerebus in the end meant a lot more to me personally than it did as a work of art. I met my wife Avril because of it in 1992 — a Cerebus fan living in New Zealand, she had a 'hobby' of writing to interesting people who had letters printed in Cerebus, and one particularly oddball letter I had in there provoked a response from her. We became penpals, and she visited me in college in Mississippi in 1993, and we continued being penpals and close friends over the next several years.
One day in 1998, she had a green card and showed up on my doorstep in California, where I was living at the time. In the spirit of "what the hell" we decided to try living together. We got married in fall 1999, and in February of this year we had a bouncing baby boy together.
With her living in New Zealand and me in the Deep South at the time we met via letters, we never would've crossed paths without Cerebus.
It's weird to think about it, how fragile a thing in your life can be -- if I hadn't written that letter, if she didn't read Cerebus, if either of us lost interest in corresponding, where would we be today?
Not that I consider Dave Sim our "matchmaker." Sim would despise the notion I guess -- to boil down a very complex ideology, Sim now basically believes women are "voids" and that a Marxist-feminist conspiracy rules the world. That simplifies it but to many longtime fans some highly inflammatory remarks he had in Cerebus a few years back led Sim to be branded a wacko misogynist. Sim devoted more and more of Cerebus over the years to his interminable essay rants and less to the comic itself. 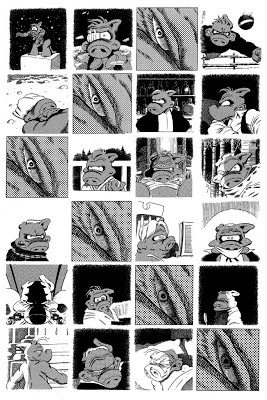 I don't want to get into too lengthy an analysis of Cerebus here, because for one I'd need to re-read most of the last 150 issues before I could come close to making a final judgment. After reading the final issue today, it was a bittersweet thing. Partly I'm just glad I'll spend the $2 on something else each month.
Sim is impossible to define neatly. Frankly the guy usually comes across like a grade-A ass in print (see this interview for an example). But I respect his accomplishments and the vision, even if in my mind and a lot of others it all lost focus as it went along.
Cerebus is kind of a frustrating failure. A creator can bring his life and beliefs into his work and most do. But in Cerebus the creator and the comic became indistinguishable somewhere along the way. I felt like the story of Cerebus and the goal of simply telling a story got lost somewhere around #200. Instead of letting the story flow organically, it became a very bumpy ride as Sim abandoned characters readers had grown to like, wrote longer and longer essays, and kept throwing in bizarrely incongruous things like parodies of Woody Allen, an F. Scott Fitzgerald and Ernest Hemingway pastiche, and more. That stuff could've worked and had in the past -- Sim's "Melmoth" storyline from around #150 basically took 10 issues to show us the death of Oscar Wilde. But the last third of the story reeked of the moral and physical isolation Sim had driven himself into.
For a tiny group of us, Cerebus was a constant. The comic went from 30,000 readers at its height to less than 5,000. For those of us who hung on to the end, it's hard not to take stock of where you are now and where you were when you started. I would've stopped reading Cerebus a while back if it weren't for a slight sense of obligation and that damn fanboy urge to see how it ends.
It came a long way from the chummy, fan club feel the heyday of the comic had (circa #50-#120 maybe) to the lonely spectacle it was at the end, Sim telling us he lives alone with no possessions, devoted to the religion he's invented and donating all his artwork and possessions.
I am glad I've been reading Cerebus, even if the last several years have mostly been out of a sense of duty. Sim's work is guaranteed to spark an argument among comic fans (like here or here) There are defenders, too, and even a magazine planned just to examine Cerebus as a story.
It's a flawed epic to be sure, but I feel like I got something from the entire 300-issue spectacle -- even if it was just the realization that doing 6,000 pages of a comic book might drive a man crazy.
After all, whether Dave Sim likes it or not, without it I wouldn't have met my wife and we wouldn't have the fine little man we do today. Ain't it weird how life works?

If you're interested in reading Cerebus, it's been collected into about a dozen paperbacks, which can be found at most any decent comic store. I recommend High Society, Jaka's Story, Church & State or the first volume Cerebus as a starting point.
Posted by Nik at 10:27 AM