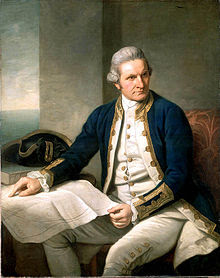 I am fascinated by Captain James Cook, and the footprints he's left on New Zealand history.

Cook was the first European to widely explore New Zealand, to reach eastern Australia, to enter the Antarctic and visit many of the South Pacific nations. His travels took him from the bottom of the world to nearly the top in Alaska. By any measurement, he was one of the greatest explorers of all time, adding detail to a globe that was largely blank.

Cook's traces are everywhere in New Zealand - he spent a lot of time here on his three global voyages, mapping more of the country than anyone before and engaging with the Maori people. Last weekend, we were up in the Bay of Islands on holiday, and I stood in Oneroa Bay looking at the spot where Cook weighed anchor in 1769. I don't imagine the view has changed much since. I've visited several other spots Cook once landed in New Zealand and it's always fascinating to put your mind into this vanished world. A few years ago I got to see a life-size working replica of his famous ship the Endeavour in Sydney, and it blew my mind to realise just how small and cramped the vessel really was. 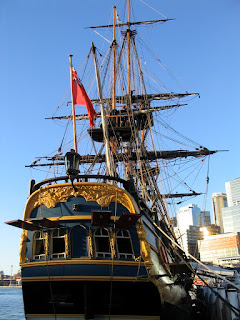 Captain Cook's legacy is seen as mixed these days - while he was unquestionably one of the greatest explorers of all time, the European invasion also changed life for the worse in many of the Pacific Islands and countries he visited. Disease, guns, poverty, even genocide followed in a lot of the countries Cook visited, like a dismal trail of modernization. But can you really lay all the ills of western civilisation at the feet of Captain Cook?

I've read several books about Cook, who kind of like Lincoln or Churchill, has new facets seen in each retelling of his familiar story. One of my favorite "Cook books" is New Zealand historian Anne Salmond's "Trial of the Cannibal Dog: Captain Cook in the South Seas," which attempts to equally give both the European and Pacific view of his travels. Salmond goes far deeper than the usual cliched "happy native" portrayal of islanders. She gives a deep and knowing look at their cultures and shows how places like Tahiti, with an entire society built upon the notion of free love, honour and lack of possessions clashed with the European culture. Salmond shows Cook's flaws, but also explains why things ended so badly for him in a compelling, original fashion.

Another book I highly recommend is Tony Horwitz's "Blue Latitudes: Boldly Going Where Captain Cook Has Gone Before," which is steeped in fascination with Cook's legacy and deeds. Horwitz has a very fun approach with the subject, hopping about and interviewing modern-day New Zealanders and others about their feelings on Cook, travelling queasily in a replica of the Endeavour, and trying to repair the "Conqueror Cook" reputation that has become fashionable these days.

My own opinion is that Cook was a great figure of history - not a perfect one by any means. But he filled in the map for nearly half the globe in a way few can even fathom now. The sheer courage involved in sailing off the edge of the map again and again is unimaginable. I was pretty fascinated a few years ago to stand on the replica of the Endeavour in Sydney and imagine this small boat heaving through the oceans, not just to the South Pacific but as far as the frozen Antarctic and all the way up to the Bering Strait in Alaska. 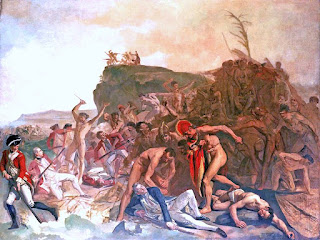 He could've been another Pizarro, wiping out natives with impunity. But Cook often genuinely tried to understand the cultures he encountered and forbade his men from raping and pillaging. Sure, by our standards today he would still come off as rather biased and racist, but you cannot judge a man of 1770 by the perspective of 2012. Cook's own moderately enlightened views frayed with time - by his third voyage, a worn-out Cook began acting far more ruthlessly, took umbrage at repeated thefts by Hawaiian natives, and the conflicts ended in his brutal death.

It's perhaps faint praise to say Captain Cook was a bit more liberal when compared to many other explorers of his time. But the rest of the world would have discovered the South Pacific eventually even if Cook had sunk just outside British ports on his first voyage. For his sheer intrepid ambition, his tremendous sailing skills and his attempts, blinkered as they might have been, to learn about the places he visited, Cook is still very much worth remembering.

"Ambition leads me not only farther than any other man has been before me, but as far as I think it possible for man to go." - Captain James Cook