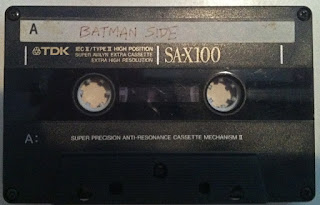 Ah, cassettes. They still seem fashionably retro to me, a spot I realize CDs in general probably occupy for everyone under the age of 30. The box of mix tapes dating from my pre-millennial youth still sits in the garage, a bit dusty and cobwebby, but full of strange memories. Here's another dive into the navel-gazing world of nostalgia:

Who it was for: Let's pretend the wife doesn't read my blog. This one was for an old girlfriend, who we shall call "M" here as frankly we're all old and married and have kids and stuff now. But once upon a time, I was a worldly college senior and she was a dimple-cheeked freshman, I was full of ego and she was extraordinarily kind, and we hooked up for a few short weeks. Time was the enemy, though - we got together about 6 weeks before the end of the school year, and I was off to New York City for a big fancy internship with "Billboard" magazine and she was off to New Orleans. Can you keep a relationship that's just started going when you spend an entire summer apart?

The answer, of course, was "no." Although I wrote her often (real letters, no email then!) and we tried, we drifted apart over those three months. When we all came back to school in the fall, she had another boyfriend and that was that. The summer of 1994 is an exceedingly strange time in my mind, even now -- all by myself in the biggest city in the world, the universe full of potential and every detail of sprawling Manhattan etched in my mind.

I sent her this tape as summer began, trying to hold on to things. 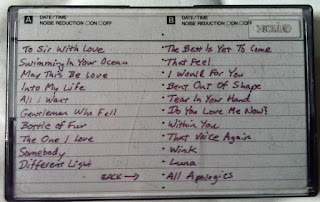 What this says about my music tastes at the time: Actually, I'm not as embarrassed by this one as I am by some other mix tapes I made. Kurt Cobain was recently dead and so was grunge, and there's a nice mix of pop, alternative rock and out-of-nowhere clangers. I was getting to be a bit more eclectic in my tastes, I think.

What was I thinking? But then again, there's an Amy Grant song here. Amy freakin' Grant. I honestly don't even know how that got on there.

This song could totally be taken the wrong way:

Seriously, I think I overdid it: "Love" is in at least four song titles and most of the songs here are on that topic. Considering we were only dating a few weeks, I probably came on too strong.

Clever left-field choices: You can't go wrong with a dash of Tom Waits, and I love the jaunty feel of the Sinatra song kicking off side 2. I've always thought Crash Test Dummies were rather unfairly maligned as one-hit wonders, and "Swimming In Your Ocean" is a nice little gem off their "God Shuffled His Feet" album.

Totally obvious choice: I think I used "That's All" by Genesis on at least 75% of the mix tapes I ever made. I love that song, but yeah, kind of a cliche. And ending with "All Apologies" seemed quite poignant just weeks after Cobain's death, but might be a bit forced now. Still, overall, I rather like this tape and what it was about the wide-eyed boy from Mississippi I was then, off to New York City for a summer that - cliches be damned - kind of changed everything for me.