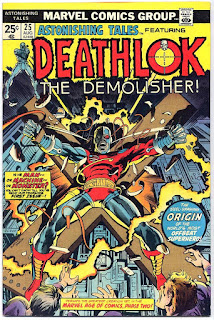 Every red-blooded boy loves cyborgs. Half-man, half-robot, what’s not to love? The Marvel Comics character Deathlok is a bit on the obscure side, but debuting in 1974, he’s the grandfather of Robocop, Arnold’s Terminator and many more equally mean machine-men.

Who: Deathlok “the demolisher,” a.k.a. Col. Luther Manning, an American soldier who suffers horrible injuries but is reanimated and turned into the experimental Deathlok cyborg wandering through a ruined future world.

Why I dig: I didn’t often pick up “Captain America” as a kid but the cover of #286, featuring Deathlok taking aim at the Captain, is pretty darned sweet. Drawn beautifully by Mike Zeck, it really makes Deathlok look half-zombie, half machine, and you can practically feel the gritty rot. It was about 1983, my first exposure to Deathlok, but it took me years to get around to finding his obscure 1970s original appearances.

The original series of Deathlok stories that ran in Marvel’s Astonishing Tales comics in the 1970s was a kitschy romp, created by artist Rich Buckler, and with that marvellous “make it up as we go along” feeling so many 1970s Marvel comics had which make them such immersive, if goofy, fun. Deathlok wanders through an apocalyptic America (in the far future of 1990!!) hunting the maniacal Ryker. There’s not a lot of plot to these stories but Buckler and Doug Moench give it a tactile atmosphere. Many of the sci-fi tropes we now consider a bit cliché originated in these pages. I wouldn’t ever call Deathlok great art – the series flounders about in search of a real hook other than the mangled Deathlok’s identity crisis, and unfortunately it ends just as it's really getting good – but it’s still a lot of fun.

Read this: The “Deathlok Masterworks” hardcover is a bit on the pricey side, but it collects pretty much every decent Deathlok story there’s ever been, including that Captain America multi-parter that attempts to sort out his tangled history. Unfortunately, like an awful lot of characters, Deathlok’s been killed, reborn, resurrected, rebooted and redone so many times since the 1980s that I don’t even know who he is these days. But that’s all right. Give me the shiny Deathlok Masterworks and a sunny afternoon and I’m good as gold.
Posted by Nik at 8:15 PM