I was an avid fan of pornography last night. The New Pornographers, that is, the Canadian indie-pop collective who played an excellent show at the Kings Arms in Auckland last night. 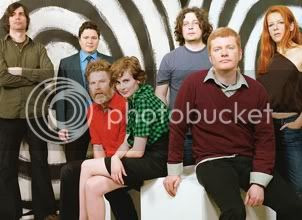 That band name is a bit of a joke -- there's not much immoral about this band, who for five albums have been exploring the pleasures of hook-filled, harmony-laden energetic pop. The main players are leader Carl "AC" Newman, Neko Case, Dan Bejar and Kathryn Calder, all of whom have had considerable success on their own. If you put Squeeze, Big Star, Cheap Trick, ELO and The Beatles in a blender you might get something like this all-star alt-rock grouping.

It was a hot, humid Auckland spring night, with sweat dripping off everyone. The Kings Arms is a right tiny, intimate place so I was less than 10 feet away from Case the entire time. The show had a freewheeling, relaxed vibe. Between the heat and probable jetlag by the seven-member band it took a few songs for the momentum to really get going and the sound was muddy for a few tunes. (The bass player actually missed getting onstage for the first song, which the band only noticed at the end of the song!) There were a couple of false starts, but there was an energetic good cheer despite the hitches. Throughout the night Newman and Case bantered snarkily with the audience. But like a steamroller, the band kept locking into these fantastic harmonic grooves where the combination of voices and their wall of sound approach blew the crowd away. 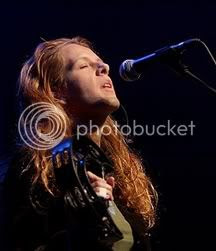 The set featured a heaping helping of songs from their most successful album, 2005's near-masterpiece "Twin Cinema". Newman led the show and did a great job crunching on guitar chords and trading off lead vocals with Case. It was a real pleasure for me to finally see siren Case, who's built the most successful solo career of the group. Her voice is justly famed and to hear her wailing out just a few feet away was awesome.

The Pornographers ramped through many of their best tunes such as "Use It," "The Bleeding Heart Show" and "Challengers." I've always liked how Newman's songwriting combines pop accessibility with twisting, strange lyrics, and as a live show the songs hit sweet spot after sweet spot. Nothing quite like the harmonies Newman, Case and Calder could conjure together. (And I'd think it's quite hard to reproduce live a note-perfect whistling chorus like they did in "The Crash Years" from their latest album "Together.") Sadly missing from this tour was glam-pop singer Bejar, who crafts some of the band's most addictive songs, but Newman did an excellent job filling in on Bejar's sneery vocals on songs like a crowd-pleasing encore of "Jackie Dressed in Cobras."

Here's one of my favorite of their tunes, "The Bleeding Heart Show."