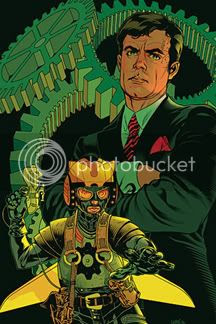 The final issue of Bryan K. Vaughan and Tony Harris's DC/Wildstorm series "Ex Machina" came out this past week. Issue #50 wrapped up the tale of Mitchell Hundred, the would-be superhero who became the mayor of New York City, and like the entire series, it was a thoughtful, edgy, often surprising dive into the world of politics, heroism and culture. Like Vaughan's other big series "Y, The Last Man," this was an epic tale, but grounded in superb characterization of Mayor Hundred and a vast supporting cast.

Who: The Great Machine, the world's only superhero -- who becomes the mayor of New York City after helping save thousands on Sept. 11, 2001.

What: Mitchell Hundred discovered a piece of alien technology that gave him the ability to communicate with machines and became the short-lived superhero The Great Machine, who managed to avert the destruction of one of the Twin Towers on 9/11. He uses his fame to become the Mayor of New York City, but his strange past and the mysteries of his powers keep coming back to haunt him...

Why I dig: "Ex Machina" was not really a book about superheroes. Instead, it was a book about politicians, who aren't always that heroic, and Vaughan created a kind of "West Wing" meets "X-Files" vibe to this always interesting series. All sorts of topical events from the last six years are woven into the twisting, time-hopping narrative - terrorism, abortion, art vs. smut, crime, gay marriage. 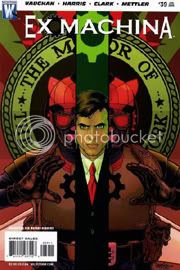 The comic could sometimes verge on being too talky, and its hot-topic issues may make it seem dated in years to come, but I rather liked the naive liberal idealism Hundred has -- and what happens to him throughout the series. Vaughan has a knack for dialogue and complex, realistic characters who don't hew to just one point of view. Harris' fluid, photorealistic art is an integral part of the series (in a rarity these days, Harris drew every issue of the main series). I loved his work on "Starman" a while back but he's taken it to the next level here.

"Ex Machina" is a series that rewards re-reading, which many comics don't these days. Indeed, the final issue is so devastating and poignant that it inspired me to go back and start reading the entire series again from scratch. I was fascinated to see how #50 wraps up so nicely with #1 from over six years ago. It's one of the most interesting statements on superheroes we've seen this decade, and hopefully will only grow in reputation over time.
Posted by Nik at 8:38 AM