My Classic Comic ABCs: The League of Extraordinary Gentlemen V. 2 #5 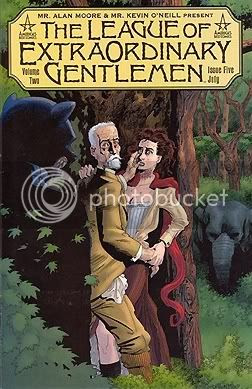 I can't believe I've gotten nearly halfway through the alphabet in my letter-by-letter survey of favorite comics in my 25+ years of comic collecting, and I have yet to bring up Alan Moore. But where do you start with the man who, I think it's fair to say, is regarded as quite probably the finest writer ever to delve into comic books? Do you go with "Watchmen," "From Hell," "Swamp Thing," "V For Vendetta," "Miracleman"?

But trying to come up with a comic that begins with "L" to fit this here series, one title kept hopping in my mind -- "League of Extraordinary Gentlemen." It's a shame that the general public only knows about this through the shockingly awful Sean Connery film bomb, because the original comics, to my mind, are perhaps Alan Moore's most interesting work since his 1980s explosion of ideas. "League" tells the tale of a group of characters from popular Victorian fiction who've banded together – Captain Nemo, Mr. Hyde, The Invisible Man, Virginia Woolf's Orlando, Mina Harker of "Dracula," Allan Quatermain and many more. But over several miniseries and graphic novels the concept has expanded to, as Moore has put it, an opportunity to "merge all works of fiction into one world." 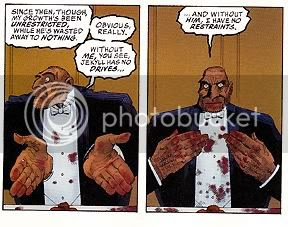 If I had to pick one single issue of "League" that dazzles me the most, it's the unforgettable fifth chapter of the second serial, "Red In Tooth And Claw." As London battles the Martian invasion from H.G. Wells' "War of the Worlds," the League try to stop an impossible foe. But Moore intertwines the Martian invasion with a deconstruction of the League itself -- Mina and Quatermain become lovers, several League members die, and Victorian fiction never seemed quite so disturbing. In perhaps the most famous scene in this book, the terrifying Edward Hyde slays the evil Invisible Man, who has turned traitor to the Martians. The death of the Invisible Man here would rank in my top 10 most disturbing comics scenes ever. (Perhaps more because of what's not shown than what is shown). It's old hat to "reimagine" old tales but there's something truly disquieting about how artist Kevin O'Neill shows us the unseemly, icky side of characters like Dr. Moreau or Sherlock Holmes.

Comics have, over their history, becomes a vertitable ouroboros -- a snake eating its own tail – as they spiral back on their own history more and more. Alan Moore acknowledges this in much of his work, but what's so cunning about "League" to me is his encyclopedic scope in expanding his eye to all realms of fiction.

Of course, it doesn't always work -- the "Black Dossier" League installment became so sprawling and meta-fictional that it kind of lost track of the simple pleasure of the story. But when League is firing on all cylinders, you get a sense that "everything is connected," and it kind of makes you rethink your relationship to stories as you witness such a vast and never-ending tapestry. These tales work first as stirring old-fashioned adventure, but secondly as a kind of passageway into the past. In fact, entire books have been written annotating Moore and O'Neill's laundry list of homages and cameos in these books -- and I'd have to say reading the chatty and well-researched annotations of Jess Nevins is just about as interesting as the original stories.

It's impossible for me to pick the one best Alan Moore tale -- that's like choosing your favorite Beatles song or John Updike's best single sentence -- but "League" is certainly in the top five in my book.