...So by the way, we bought a house last week. We've been reluctant to publicize it all too much until everything is settled with the contracts and such ("we almost bought a house"), but now we're 99% set (just waiting for a final lawyer sign-off on a quibble about a few repairs). We are homeowners! Or rather, I should say,

Yeah, it all turned out fairly easy in the end – incredibly stressful of course, and spending far more money than I've probably spent the rest of my life put together, but in a month or two we will be the proud residents of our own 3-bedroom home with 2-car garage. 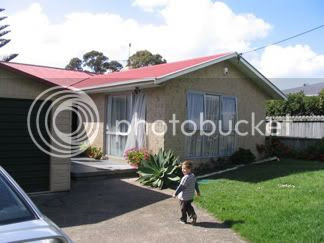 It turned out this was a house we actually looked at in the early days of our real estate hunting, a month or two ago. In the meantime the market in Auckland has continued to stagnate, a bit like the US is right now but not quite as dramatic. We kept it on our list of "maybes" and returned to look at it last week now that we had a better idea of what we wanted. It had even had a nice little price drop in the meantime, and on a second look we really liked it. Fenced yard, quiet neighborhood, a bit of land which is a rarity in Auckland central, and in very nice shape with a good deal of space. And just 3km (a little less than two miles) from where I work!

Once you make a decision – "I want that" – the process suddenly gets mighty fast. We looked at the house Wednesday morning, and by Thursday afternoon the owners had accepted our offer after a bit of batting back and forth. Egad! The last week has been filled with zipping around (mostly by lovely wife) to make the final deals, get the place inspected, et cetera. We should go "unconditional" by Monday and be able to sit back and wait until we move into our own house for the first time since August 2006, and the first place we've owned, well... ever!

Now that we decided to buy a place, we've realized how we basically have no furniture to our names (having sold our Wal-Mart vintage fare in the US before we left). So we get to start shopping so we actually have something to put in our house! After saving a lot of money this past year, it's suddenly going to start going away real soon, ain't it?

Now that I've dropped our big news, I'm going to take a little blog break right now. My parents are visiting from the US for a few weeks so there's much time spent with them, my day job is absolutely full-out crazy busy, and there's much to do before we move into our future home in early January. See you soon!
Posted by Nik at 7:17 PM