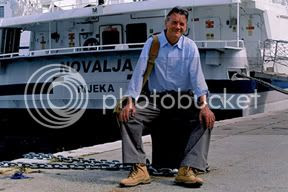 Well, not really, except that for my birthday outing last night Avril and I did get a chance to go out and enjoy a very fun talk by Michael Palin, my favorite ex-Monty Python and a fantastic documentary travel filmmaker. Palin was out promoting his new BBC series, "New Europe" and spoke over on Auckland's North Shore. We had great seats, just 5 rows from the stage.

Palin has done an excellent job re-imagining himself post-Python and "A Fish Called Wanda" with his travel docs and accompanying books – "Around The World In 80 Days," "Pole To Pole," "Full Circle," "Sahara" and "Himalaya." 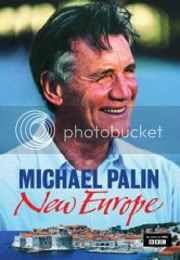 His latest, "New Europe," takes a spin around the former eastern bloc countries and how they've changed in the past 20 years. Palin gave a great off-the-cuff 45-minute talk about his travels, digressing all over the place from his Python days to visits to the South and North Poles. We heard about nudist Albanian chefs, leeches in Estonia, falling off mountains in Italy, mines in Bosnia and his favorite movie role (the reluctant centurion in "Life Of Brian," curiously enough). As you might expect, it was all pretty hilarious, with Palin doing some excellent impressions of the people he's met in his travels. He also was interviewed and took some audience questions. I can't imagine too many other second acts in public life quite as cool as what Palin's been doing these last 20 years.

Great talk, great fun, and left with a head full of amazing journeys. Missed out on getting Palin to sign a just-purchased paperback of his "Diaries 1969-1979" which I've been wanting to read, as the line was a couple hundred people long, but I've never been huge on signed books anyway. The talk itself was great, and can't wait to see "New Europe" when it starts screening here next month.
Posted by Nik at 6:38 PM