Still feeling dark clouds about the fatal end of Dr. Hunter S. Thompson, and what a horrible way to go. As mentioned in my post earlier today, I did have the fortune to meet the man once, and it was a typically Gonzo occasion that inspired this little column I wrote for The Daily Mississippian all the way back on May 2, 1994. (Bizarrely enough, fellow blogger H, who commented below, also happened to be at the same event in New Orleans!)

My weak words don't hold up so well 11 years on, I guess, but for those who are interested, here's the impression I had of my meeting Hunter S. Thompson: 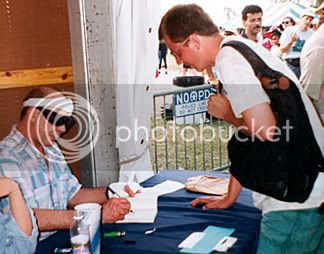 *Note horrible attempt at hip haircut on my part and utter disdain on HST's part.

Fear and Loathing in New Orleans, with apologies.
Well, I finally made it down to the Big Easy weekend before last. And what a wonderful town it was. Went down there with Melanie* for the dreaded “meet-the-parents” ritual (which came off very well, thanks for asking). We went to Jazzfest ‘94, an annual musical extravaganza at the New Orleans fairgrounds — tons of music, people, beer and booths hawking everything from dashikis to handmade jewelry to exotic knives. There was aural candy for any taste, from Boz Scaggs to Dr. John to Jimmy Buffett.
While wandering around the booths, Melanie and I found a little book tent. Exploring the place, I found a notice announcing some of the authors who’d be doing book signings at the tent that day. Among the names was the familiar one of Dr. Hunter S. Thompson.
The Doctor! Father of the esoteric, reviled and idolized field of Gonzo Journalism! One of my personal literary idols and a true crazy man to boot. I convinced Melanie that it’d be a nifty thing to let me go and meet him, to get the Doc to sign a just-purchased copy of Fear And Loathing In Las Vegas. I’ve always been a fan of Thompson’s bizarre anything-including-the-kitchen-sink style of reporting, the coverage of events ranging from the history of the Hell’s Angels to the 1972 Presidential campaign — his style so out there that half the time you lose sight of the line between fact and fiction.
So we went to the booth about 2:45 or so for the 3 o’clock signing. There was already a sizeable line for this unpublicized event. Melanie took my camera and got a good spot in the shade while I met a burly gent named Gil who proclaimed that Thompson was “the king of all things Gonzo!”
Melanie enjoyed the shade and met some Canadians while I listened to Gil hold an impromptu belching contest and slowly watched the sun burn me a nice shade of obsidian. Thompson finally showed around 4:30, large bandage wrapped around his left hand and a beer in his right. Enormous beetle-like sunglasses obscured his eyes completely. I crumbled into a pile of charcoal under the sun’s onslaught and the line inched forwards.
At this point, the Jimmy Buffett** show was about to kick off. Thompson signed books at an agonizingly slow pace — rumor had it he was deeply distraught over Richard Nixon’s death that Friday. It seemed odd, that a man who once compared Nixon to Adolph Hitler should be so broken up over his death. His “periodic medical breaks” over his hand — treated by the administration of several strange vials of liquids — slowed things down even more.
There was the wit in line who called out, “Dr. Thompson! How do you feel about Nixon?”
Thompson answered in his trademark indecipherable mumble, “I loved the man.” And that was all he had to say on the subject.
I finally made it to the front of the line, several shades darker than I’d been at the start, and handed over my book for him to sign. In my best fanboy mode, I stammered out to him how much I enjoyed his work.
Thompson shook his head a bit spastically, and muttered something about “bats” and “gummo wedder t’day nahw eh?” He scribbled “to Nick [sic] - HST” with a ballpoint pen, and then immediately afterwards took another extended medical break. The smell of that joint was nearly overpowering.
There’s nothing quite like meeting your idols – if only to discover that they’re just as screwed up as the rest of us. I’m not saying I regretted meeting HST — in fact, I got a rather masochistic joy out of it, sunburn and all. And Melanie, bless her, wasn’t terribly irate about spending two hours indulging her companion’s whims.

*2005 annotation: A former girlfriend who wised up shortly therafter, and I am sure has gone on to wonderful things in her life.
**In hindsight, I really didn't care much for Jimmy Buffett.
Posted by Nik at 3:50 PM