Listen up! Nik's unheralded albums (#1 in a series) 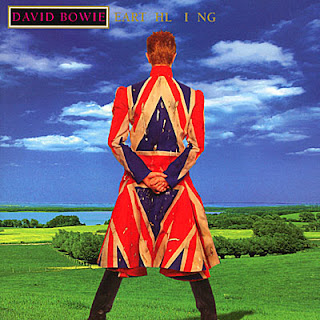 So every once in a while, I'll pick a CD out of the pile I think doesn't get enough respect or that you might never have heard of. Because I'm an enormous David Bowie geek with nearly 40 of his official CDs, *cough cough* bootlegs, etc., I want to give a shout to 1997's "Earthling," a somewhat acclaimed but not huge popular success for the former Mr. David Jones.

"Earthling" comes at an interesting time for Bowie; I call it his "midlife crisis" album, as it came out the same year he turned 50. Heavily influenced by drum 'n' bass dance music, "jungle" techno and industrial rock, it follows the same path started in 1995's "Outside," a strange and powerful Goth cyber-murder concept album that really began Bowie's modern critical revival after Tin Machine and various subpar '80s and '90s efforts. "Earthling" is less heralded by fans and critics, but it's one of my top 5 Bowie albums.

A lot of that is due to the time I discovered it; most great records evoke something in our lives, have some personal relationship to us beyond mere melody. For me, "Earthling" came along when I'd just moved rather haphazardly across the country, from post-college Mississippi to my old homeland of California. I moved without a real plan or job, and after a few months of bumming about and relying on the kindness of old friends, ended up working at a tiny little paper in the San Joaquin Valley south of Sacramento, a dull, strip-mall kind of nowheresville with endless valley landscapes. Didn't know where I'd go next, wondering if I'd screwed up by leaving all my old pals in the South, etc.

So "Earthling" was the soundtrack for much of fall '97 and early '98, as I kind of drifted in a job that was OK in a town where everybody my age seemed to have three kids and work at Kmart. (Obviously, life got better, my future wife Avril emigrated to the U.S. and we moved up to Lake Tahoe in summer '98.) "Earthling" is a really anxious, fretful Bowie album, one that kind of assaults you with rippling beats and distorted guitars. It's the loudest of all his albums, and it definitely feels a bit like a 50-year-old trying to sound cool. Yet it works for me to this day.

The lead track, "Little Wonder," is all skittering blips and screeching guitars, Bowie chattering away like a man on the edge of a breakdown. Lyrics in general aren't the focus of this album, but meant to help set the mood. Several tracks, like "Looking for Satellites" or "Law (Earthling on Fire)," are abstractions set to thumping, circling dance music, meant to create mood more than anything. A song like "Seven Years in Tibet," with a compulsive sway, roaring chorus and snippets of Mandarin, is as experimental in its way as any song on "Low." One of my personal favorites on "Earthling" is "Dead Man Walking," a rave-up defiant rebuttal to aging, colored with Bowie's trademark nostalgia and wistfulness, but with a beat you can dance to. Another sterling track is "I'm Afraid Of Americans," which could nearly be a novelty song if it weren't for the very real angst Bowie brings to the tune, wailing lines like "I'm afraid of Americans / I'm afraid of the world / I'm afraid I can't help it." You believe him. Yet my most replayed song on "Earthling" is probably "The Last Thing You Should Do," all raging at the darkness and jittery fear. It's claustrophobic but cathartic at the same time, and the kind of song many techno bands are striving for and miss much of the time. I listened to it a lot in the fall of 1997, wondering who I was and who I'd be a year from then.

Like I said, fear runs through the tunes of "Earthling," fear of death, losing power, potency and the world. Yet it never becomes too dark, and Bowie clearly is having fun with this experiment in techno-rock. A few of the songs are more disposable and meandering than others, but at the very least they get your fingers tapping. "Earthling" is very different from most of Bowie's catalog, with the exception of its predecessor "Outside." His next album, "hours..." heralded a move toward a gentler, more introspective phase, which he's continued with his last two excellent discs, "Heathen" and "Reality." But I think that's part of what I love about Bowie, his willingness to be that rock 'n' roll chameleon. Pick three random Bowie CDs from the past 35 years and play them to a novice, and I imagine he'd have trouble realizing they're by the same man. Despite appropriating the sound of bands like Chemical Brothers and Nine Inch Nails during this phase, Bowie still managed to be unmistakably himself. "Earthling" is one of his strongest albums in a lifetime full of peaks.
Posted by Nik at 10:58 AM